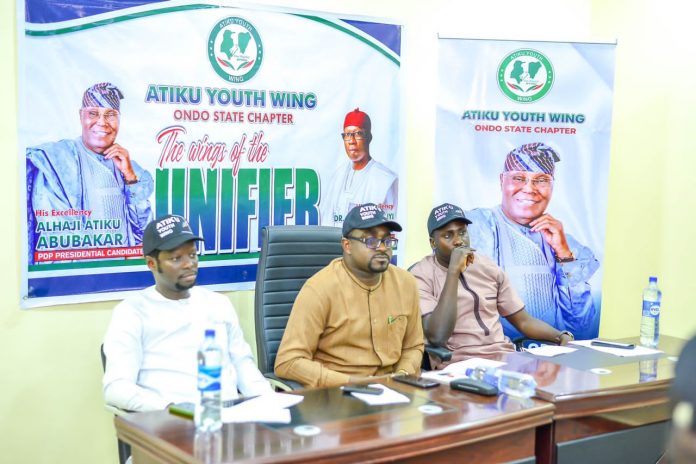 One of the foremost campaign support groups of the Peoples Democratic Party,the Atiku Youth Wing has inaugurated its ondo state chapter executives and local government coordinators. The event held at the group’s secretariat in Oke-Aro area of Akure,the state capital on Monday September 26th 2022.

Speaking at the inauguration ceremony,a member of the Ondo State House of Assembly who doubles as the group’s Southwest zonal coordinator, Hon. Tomide Akinribido charged the newly inaugurated officials to work assiduously and mobilize support across the wards and units of Ondo state to ensure that the PDP Presidential flagbearer, Atiku Abubakar, wins the state in the February polls.

Also speaking at the event, a member of the Osun State House of Assembly who doubles as the Atiku Youth Wing Southwest zonal secretary, Hon. Adewumi Adeyemi described the PDP Presidential candidate as the most prepared in the race,while urging the newly inaugurated officials to be committed in ensuring the success of the PDP at the polls.

Speaking on behalf of the officials,the Ondo state coordinator of the Atiku Youth Wing, Amb. Temitope Ajayi assured of the capacity of the state executives and local government coordinators to deliver on the duties assigned.

He further expressed their confidence in the ability of Alhaji Atiku Abubakar to turn around the fortunes of the country and make it a prosperous nation for the teeming youths.