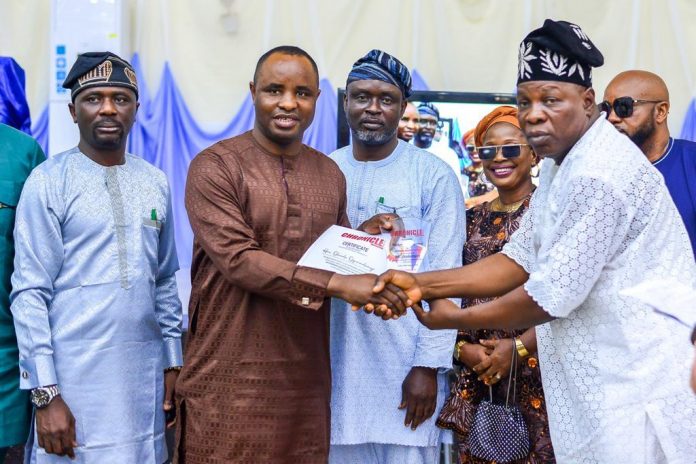 … He has taken state representative to another level – Chronicle Magazines

There is a saying that a truthful man won’t die in the midst of hatred and propaganda. It was a joyful moment, a thrilling time, and immeasurable happiness as Ondo State House of Assembly majority leader, Honourable Oluwole Ogunmolasuyi, was honoured by the Chronicle Magazine as the outstanding legislator of the year.

It is no doubt that Honourable Oluwole Emmanuel Ogunmolasuyi is a man of the people. Although he is a first-time state legislator, colleagues and constituency members have described him as a man of integrity, diligence, and willingness to go the extra mile to ensure justice. No wonder he became the majority leader and has continued to ensure closeness with his constituency. This was highlighted yesterday when Chronicle Magazine honoured him with an Outstanding Legislator of the Year Award.

However, Hon. Ogunmolasuyi has chosen to remain humble because he believes this is the time to even do more for the people who gave him the mandate. More so, take up more responsibilities in making Ondo State a better place among its counterparts. The majority leader thanked the Chronicle Magazine for honouring him with the award and promised to keep working. Honourable Ogunmolasuyi, in his vote of thanks, singled out praises for his constituency, who have always kept him on his toes in terms of activeness. He also appreciated the Ondo State Governor, Arakunrin Rotimi Akeredolu, for his support and encouragement.