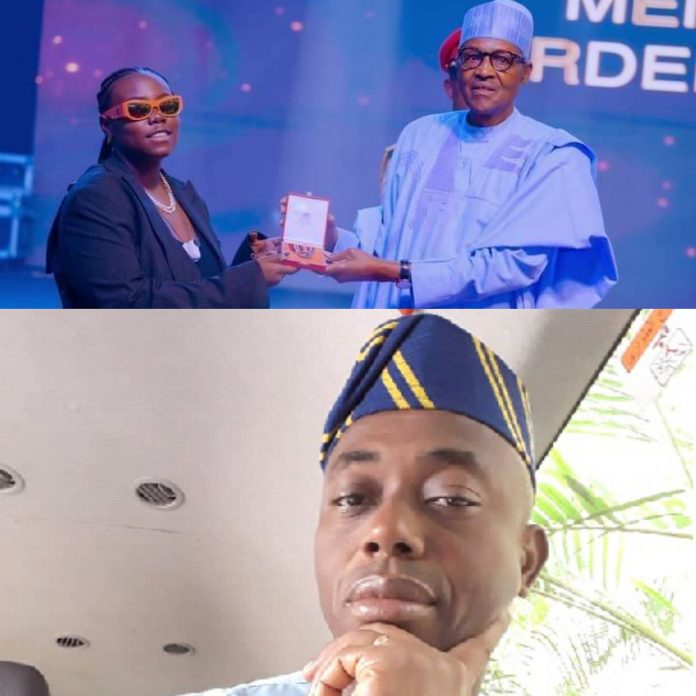 Tennis players are full of agility, they dress scantily, and are boisterous when they record great hits, but sobering at each off-cut. These estimations of tennis players are relevant to assessing Teni on stage, however with diverse simulations, depending on the type of stage that is under review; either that where she sings, or the ones on which she receives awards or honours. The last national honour Teni Apata received from PMB, and her comportment while the transactions lasted, got tongues wagging, but teeth were gnarled and not biting, as the girl in the eye of the storm would rather go and sleep to dream big, wondering how everybody would suddenly become the Fela’s kind of teacher that would teach nonsense.

With the different receptions Teni’s disposition towards Buhari received on the stage, one was reminded of the hosanna singers and crucifixion apologists that tried to either hallow Jesus or get him off course. Between those that hailed Teni for revolting against Buhari in style, to those who condemned her for her apparent lack of Omolúàbí, and others who saw nothing queer in bold strides and bonny stern look of Teni, it may be best to ask those without a sin to cast the first stone. This is not without emphasising that the stoning of the devil at jamarāt is symbolically spiritual for some while basically sombrous for others. One recurring decimal in Nigeria is that most morally corrupt people preach sanctity when relating to other people’s misdemeanour while they would emerge devil’s incarnate when their own shadowy deeds are in the public domain.

Teni Apata, a singer, songwriter, drummer, and rapper, is one of the talented young Nigerian artistes that have redefined the music space in Nigeria through their hybridised genres that play on the socio-cultural and moral depths of old labels and funky propensity of others borrowed across borders, particularly from the nuances of cataclysmic radicalised interrogation of the racially-skewed American hegemony. Teni’s other names with which she is known are; Teni, Teni the entertainer or Teni Makanaki. Some of her works are: ‘Fargin’; ‘Wait, Pareke’; ‘Askamaya’; ‘Case’ and ‘Uyo Meyo’. The performance of the last drew tears from her on stage in Uyo, Nigeria, sometime ago, with huge identification and audience participation she received during the performance. No doubt, one particular feature shared by both oral and modern performance is the relevance of the audience to either the success or failure of a performance. Painfully, mediated versions of performance are devoid of the expression of such identification or revulsion, due to spatio-temporal gaps.

With demonstrative attachment to the memory of his late father, a retired Army Brigadier-General, Simeon Olaosebikan Apata, who was murdered by hired assassins on January 8, 1995, Teni represents the ‘Indomie Generation’ that has been configured as representing a new emotionally fluid but mentally restless order, that contrasts significantly with the rigid and fastidious old tradition. Safely put, the Indomie era, punned with the brand of Indonesia fast pasta, comprises people born in the late 1990s and onwards, as well as the intermediate group of individuals born from the mid 1980s to early 1990s. This period of a new caste of Nigerians similarly coheres with when the Hip-hop kind of music, which is more or less an instrument of revolt, as well as that of unsettling old narratives and demystifying longstanding myths, started in Nigeria. It is believed that Hip-hop dates back to the late eighties and early nineties, and rapidly became a dominant aspect of youth culture.

It is, therefore, noteworthy that some members of the ‘Indomie generation’, including Teni Makanaki, were found worthy of being conferred Nigeria national honours. The National Honours Act CAP.N43 of the Laws of the Federation of Nigeria 2004 prescribes that “nominees and awardees must be Nigerians and friends of Nigeria that have made consistent and meaningful participation in community and/or national development; rendering unsolicited selfless and philanthropic services in the defence of a cause popularly adjudged to be positive, relevant and beneficial to the nation and community”. Other criteria listed by PMB during the award ceremony included “distinct act of bravery in the protection and/or defence of national interest, public peace, safety of life and property; remarkable achievement in any field of expertise where the persons activities in that field have made significant contributions to the attainment of national goals and objectives …”. The distinguished 2022 awardees included captains of industry, religious leaders and artistes, including Teni, who was conferred with Member of the Order of the Niger (MON). However, Buba Galadima felt some of the honourees should be in prison!

Tenis announcement at the award ceremony saw her walking majestically to the stage; like a soldier she drew from her late father, with her stoic body sufficiently housed in her spacious trouser baggy suit, rolling up the aisle as if meant to ‘Buga’, with her customised eye glass matching up, displaying a long look that helped her to receive the plaque from PMB, and walking away to the astonishment of a visibly frigid president and coteries. People that expressed distaste for Teni’s comportment felt that she should have grinned, just like Nigerians smile pretentiously in the face of pains, or shaken the hand of PMB who ordinarily is religiously disallowed from doing so. Some people who felt Teni should have rejected the award, allegedly like Adichie, rather than coming to ‘disgrace’ the president, must have missed the point going by the appreciation Teni expressed to the government and the people for the honour done her.

It should be noted that Teni and others in her club remind us of the ‘tainted blood’ that the old breed bequeathed to the new order, just like the genetic compositions of half-castes, mulattos and coloureds. Taking its offshoot from the Jim Crow era, the mulatto nomenclature was socially constructed and discriminatorily used for a person of mixed white and black ancestry, even though it was to achieve the taxonomies of race. The mulatto was an evidence of the pretentious promiscuous white slave owners who did not only economically commoditise enslaved black women but sexually abused them. Similar to the mulatto sense in Americas is the deployment of the term coloured in South Africa to encase the mingling of the apparently priggish separatist whiteness and openly detested subjugated blackness, as officially defined by the South African apartheid government from 1950 to 1991. The light skin products of the sexual escapades between whites and blacks have been described as a bridge to unify the extremism that hitherto divided the two groups, or an instrument of revolt.

The intermingling between whiteness and blackness, resulting in hybrid mulatto, is a metaphor for the exchanges between African tropes and western orientations, just as post independent African nations progressively and consciously sustain the westernisation of the socialisation of their children and wards. This is more so as the turn of the 21st century made boundaries fluid, precipitating the globalisation that enhanced exchanges in the cultural supermarket, mostly in favour of the hegemonic centre. Nigeria children of the ‘Indomie generation’, that also simulate the coconut-headed born free post apartheid generation in South Africa, have been raised within diluted socio-cultural spaces where western practices are more in circulation than African or Nigerian tenets. The unmitigated consumerism of Nigerians has been largely serviced by available digital devices that broadcast foreign nuances into minds that are repugnant of traditional ways of doing things.

The ‘Indomie generation’ did not just get starved of adequate Omolúàbí values, but the people belonging to the classification have been lost to westernisation, and the only socialisation they could offer their children are enhanced constitution-driven rights that are available in the West. As they get encouraged to be bold, they struggle over space with elderly people in private and public spheres, challenge status quo, and evolve a unique use of their bodies, justifying the ownership that is preached in the West. Even though the liberalisation of Nigerian socialisation is in itself commendable, as it has eliminated old myopic repressive ideals, young Nigerians belonging to the ‘Indomie generation’ have detached themselves from traditional formats of social engineering, in favour of the propositions of liberal West, as they dress to please themselves, use drugs for sex that has been made common, and challenge old age and ideas, showing that they have a better grasp of matters than the elders, who are called old school.

Rather than blame Teni for disrespecting PMB, we should blame ourselves for embracing western traditions over African models, and for ‘donating’ the ‘Indomie generation’ to western-dominated cultural supermarket, where what is normal is abnormal to Omolúàbí ethos. The ‘tainted blood’ of Teni and others is an evidence of our ‘silly’ ways of doing things; not sure of how Teni’s late father would respond to her negative profiling by some. We hope the ghosts of the dead exhumed by floods in Bayelsa would not hunt the living, as victims lick their wounds hopelessly!