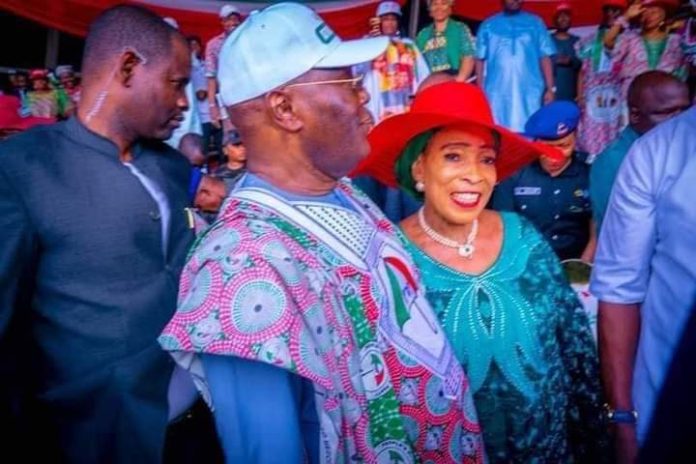 The presidential candidate of the Peoples Democratic Party (PDP), Atiku Abubakar on Monday says Lagos state was developed by the federal government and not APC as widely stated by the party and its presidential campaign.

He urged Lagos people not to believe the lies spewed by the APC government, and liberate themselves from family’s government.

“Now the APC government has been telling you lies that they develop Lagos, they are lying to you, therefore, it is time for you the people of Lagos to liberate yourself from a family government to a people’s government led by Jandor.”

Speaking on what he will do when elected as President, Atiku said, “on my own part, if you elect me as your president, I said and I promised by the grace of God that I am going to set aside $10 billion so that we can empower our young men and women in small medium enterprises.

“People were asking me where I am going to get the money. If I privatise the Port Harcourt refinery, Warri refinery, and Kaduna refinery, I will get the money. So, let me also promise you if you elect me we are going to restructure this country, what do we mean by restructuring? We will give your state and local government more power and resources. It is up to you to hold them responsible.”

Urging Lagos people to liberate themselves, Atiku said, “the people of Lagos, it is high time you take your destiny into your own hands for your own future, not for the future of one family. For in the last 23 years you are governed by one family. It is your right and your duty to take over that governance and hand it over to yourselves that is what the PDP stands for.”

“We do not want a Lagos state where the rich will become richer and the poor poorer. This Nigeria that we see today is not the Nigeria that we want, so I want to urge you all to go out and campaign for Atiku Abubakar because he will restore the lost glory of this country.”

Governor Emmanuel on his part said: “The economy of Lagos was more buoyant than the economy of so many West African countries put together. But today if you enter old Oregun, Ilepeju, do we still have those companies again? No.

“You can imagine the situation we are having right now, it takes only one route to come to Lagos Island, but it was not like that. We want to promise you that we are here in terms of the economy, once you settle the economy of Lagos you settle two-thirds per cent the economy of Nigeria.” (Independent)