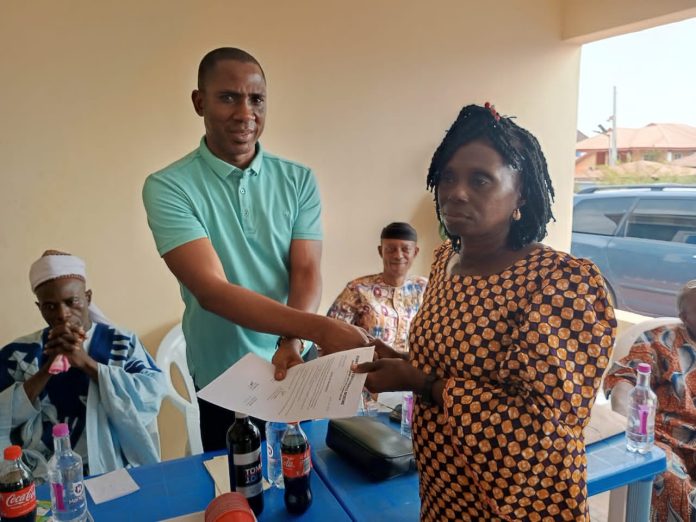 The candidate of the People’s Democratic party in the February 25 General Election, Hon Festus Akingbaso has distributed employment letters to the newly recruited teachers under the Fessy West Educational Scheme.

He presented the letters to the 15 beneficiaries today while playing host to the leadership of Idanre/Ifedore Independent Voluntary Campaign Team in Akure, Ondo State Capital.

Akingbaso, a House of Assembly member representing Idanre State Constituency is contesting for a seat at the Lower Chamber of the National Assembly, Idanre/Ifedore Federal Constituency under the platform of the People’s Democratic party.

Addressing the beneficiaries, Akingbaso said his zeal towards the recruitment exercise was borne out of the decaying educational system in the Idanre/Ifedore Federal Constituency which need urgent attention.

He said: ” Having discovered shortage of teachers in our schools especially at the primary schools level which is the foundation of education, I was inspired to employ additional hands, mostly at schools at the rural areas”.

The Rep Hopeful added that the employment was given to the beneficiaries with no political affiliation attached to it, saying his aspiration is to provide succour to all the citizens and residents of the federal constituency.

While imploring recruited teachers to be diligent and perform their official duties effectively, he promised to extend the exercise to the secondary school level in the future.

” I wish I have the capacity to employ teachers in all the local government in Ondo State; standard of our education system is falling drastically due to shortage of teachers and poor educational facilities”.

Akingbaso said his Educational Scheme has renovated schools, paid WAEC fees of over 500 students, JAMB forms for more than 1000 students among others.

He charged the teachers to be civil while dealing with the students and be a good ambassador of their respective community, noting that the pupils won’t forget in a hurry the bad habit of their teachers.

“Your salary won’t be less than what the government is paying your counterpart and you can even receive more provided you show commitment. Inspite of your late resumption, you will receive your January salaries in full”.

In a separate goodwill message, the Chairman of the Idanre/Ifedore Independent Voluntary Campaign Team, Alhaji Ibrahim Tolorunniyose said the group decided to associate with Hon Festus Akingbaso because they share the same vision with the Idanre born politician.

He advised the recruited teachers to be industrious and put in their best at their various posting, saying they shouldn’t abuse the opportunity given to them.

Speaking, the Ekiri of Ero Land, Princess Aderonke Gbadeshogun commended the lawmaker for the kind gesture, describing him as one politician that can be trusted and a promise keeper.

She appealed to the lucky beneficiaries to see the employment as a life time achievements while assuring Fessy West that all the traditional rulers in Ifedore Local Government are solidly behind him.

In the same vein, the Chairman of the League of Imams and Alfas in Ifedore Local Government, Alhaji Muhammed Abubakar Adetileyin said the lawmaker stands out among his contemporaries politician.

According to him, ” Fessy West promised all the Imams and Alfas in Ifedore Local Government food items which he redeemed, provided solar power light for our mosque, gave employment letters to Muslim faithfuls and promise to do more. If he can do all these as a state assembly lawmaker, if given higher responsibility, he will perform better”.

He added that the Muslim Community in Ifedore Local Government will soon organise special prayer as their way of showing appreciation for what he has done for them as a community.

The former Chairman of Idanre Local Government, Hon Taye Sunday commended him for implementing programme that cut across all sector be it health, education, infrastructure and human development.

“Akingbaso is making head way in all his dealings because of his approach in handling things; humility personified, accommodating politician that don’t look down on people and listening leaders that allows his think tank to come up with people’s oriented programme”.

Mr Ade Akinlalu, People’s Democratic party chairman in Idanre asked the recruited teachers to start canvassing and propagating the track record of the lawmaker in their respective local government, believing that the only way to say thank you is by mobilising people to vote for him.

Hon Leye Igbagbo, the party leader from Ifedore Local Government, asked the people of the local government to support FessyWest, saying the failure of the present member of the House of Representatives should not deter them from voting for Akingbaso whose track record has become a template for others.

He stressed that, Fessy West will do better if elected to the House of Representatives, describing him as “government” on his own considering the provision of social amenities to the people on his personal bill.