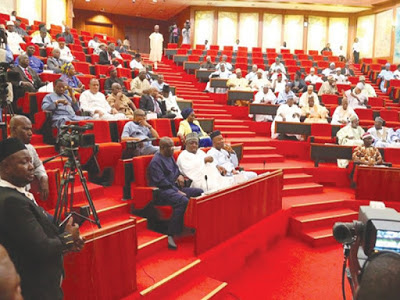 The Nigerian Senate on Wednesday, suspended plenary to enable the lawmakers to participate in campaigns for the general elections.

President of the Senate, Dr Ahmad Lawan, made the announcement at plenary.

Mr Lawan said the senate would start its recess today (Wednesday) to enable senators to participate fully in the campaigns for their return or for their political parties.

He said that “the elections of the National Assembly (members) together with that of the President, will take place on Feb. 25.

“It is our prayer and hopes that those of us who are going to participate in the national assembly elections in the senate, that God Almighty will be on our side.

“This is because we need to have those who will provide institutional memory to be around.

“The casualties have always been too heavy and too expensive for our country and for democracy in Nigeria.

“That is not to say that Nigerians should not have the way they want to elect their members of the national assembly. But it pays to retain parliamentarians if they are doing their job well.”

This, Mr Lawan said, helped the institution or the parliament in building and working for the people and for the country.

“This senate and indeed the national assembly has supported INEC to the teeth.

“Almost everything that was requested for INEC was approved here in the assembly.

“We expect that INEC will be on top of its game,” he said.

He also urged the security agencies to ensure violent-free elections.

“Nigerians should go about this elective period without any molestation or hindrance.

“No citizen should be barred from participating if such a citizen is lawfully to participate.

“That is, people should go and vote and of course, do what is right to ensure that their votes count.

“For the rest of us who may not be running we still have something to do to help the development of democracy.

“We have garnered a lot of experience working in the parliament and we still have a lot to offer.

“When we come back on Feb. 28, three days after the presidential and national assembly elections, our hope is that we come back here and review the situation that will have taken place but we pray that what we review should all be on the positive side.

“And for one legislative week, we will be in the chamber to March 1 before we will also go for the gubernatorial and state Houses of Assembly campaigns and elections of March 11.”