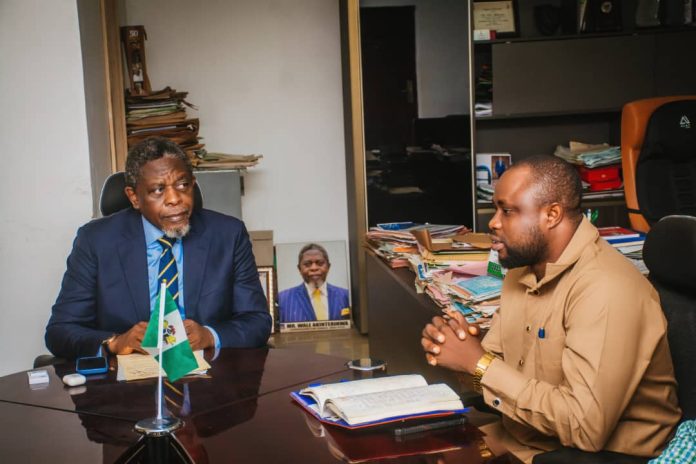 The Ondo state Commissioner for Finance, Mr Wale Akinterinwa, has commended journalists and media organizations in the state for their unprecedented support for the administration of Governor Oluwarotimi Akeredolu, SAN.

Akinterinwa, made the remark on Monday when the leadership of the Ondo NUJ council led by Prince Leke Adegbite paid him a coutesy visit in his office.

The Commissioner who is holding the position for third time under two different administrations, said “we want to thank the Ondo NUJ council for acknowledging the work of the present government led by Governor Oluwarotimi Akeredolu because is not easy for journalists to openly acknowledge good work of someone but seen is believing.”

According to him, no doubt about the fact that the government has done a lot in the areas of infrastructure and security across the state, saying Amotekun has become the major legacy of Governor Akeredolu.

Akinterinwa said the good things that hard happening at the ministry, were not just because of their ability or capability but because of the enabling environment given to them by the governor.

He said, “Governor Akeredolu has allowed us to display a little bit of our professional based on the assignment given to us. I will say that I’m glad and happy to be serving under him because he has allowed me to continue to express myself with his guidance and advise.

“He has appointed and allowed me to work and he has shared his visions with us all in such a manner that we have to key into the vision and that has helped some of us. So whatever contributions we have made in this ministry of finance, it is because we have a boss who has given us free hand to work.

“You must also find a balance in funding the needs of populace and the projects of the government which will impact on everyone across the state.

“I want to appreciate what you (the media) have done for this government, the peace and the positive media review we get, it is what you put out there.

Akinterinwa, however, promised to support whatever would enhance practice of journalism in Ondo state, especially as it concerns the need of the Ondo NUJ.

In his remark, the Permanent Secretary of the ministry, Jide Ekpobomini who described journalism as a noble profession, urged the media to sustain their unflinching support for the present administration in the state.

Earlier, the Ondo NUJ chairman, Prince Leke Adegbite, who led the executive members to the Finance Commissioner’s office, said the purpose of the visit was to let the ministry know that journalists in the state would continue fair to all stakeholders in the state in their various reports, applauding roles played by the Commissioner in the Governor Oluwarotimi Akeredolu led government’s timely payment of gratuities of Owena Press (The Hope newspaper) retired Staff.

Adegbite said “We are also here to acknowledge Mr. Governor for what he has been doing for media practitioners and houses in the state, and you can always count on our support.

“Ondo state government has been enjoying positive reportage since the beginning of this present administration. We should also commend the giant strides of Governor Akeredolu for providing adequate security for the lives and property through the state security network agency, ‘Amotekun’ alongside with others security agencies across the state and provision of infrastructure for the masses.

“We want to assure you that the support we have been giving this government will continue, because the Governor as our Grand Patron is also showing our colleagues love in some ways,” Adegbite said.