The Vice President, Professor Yemi Osinbajo, says all that needs to be done to end the challenges hampering regular supply of electricity to Nigerians will be addressed by the Federal Government.
Professor Osinbajo gave the assurance on Saturday during the inauguration of a metering company in Onna Local Government Area of Akwa Ibom State.
He said the Federal Government has identified that most distribution companies could not generate revenue through effective tariff collect due to their inability to afford the cost of metering.
The Vice President, however, hinted that government has developed a policy to address the issue of metering in the power sector.
He said, “We are going to have independent metering companies. So a distribution company does not necessarily have also to be a distributor of meters, it is now opened up.”
Professor Osinbajo, who is in Uyo, the Akwa Ibom State capital on an official visit, also announced that the Federal Government has disbursed a total of N125m to Micro Small and Medium Enterprises (MSMEs) in the state.
Elsewhere, he inaugurated a 350 million per annum capacity syringe factory also located in the same local government area, as part of events lined up to mark the 30th anniversary of the state.
Professor Osinbajo was accompanied on the official visit by the Minister of Budget and National Planning, Senator Udo Udoma. 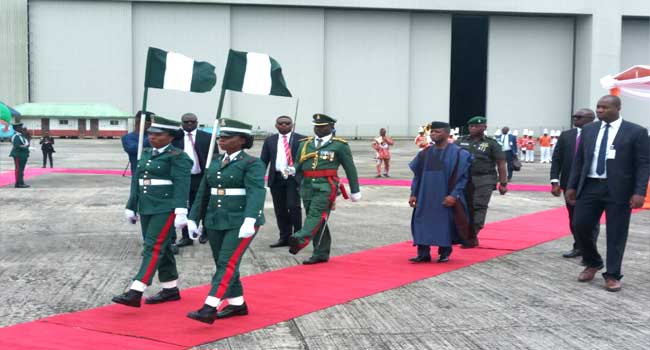 He was received at the airport by the state governor, Udom Emmanuel, and the governors of Delta and Bauchi states, Ifeanyi Okowa and Mohammed Abubakar, as well as many residents and government officials.