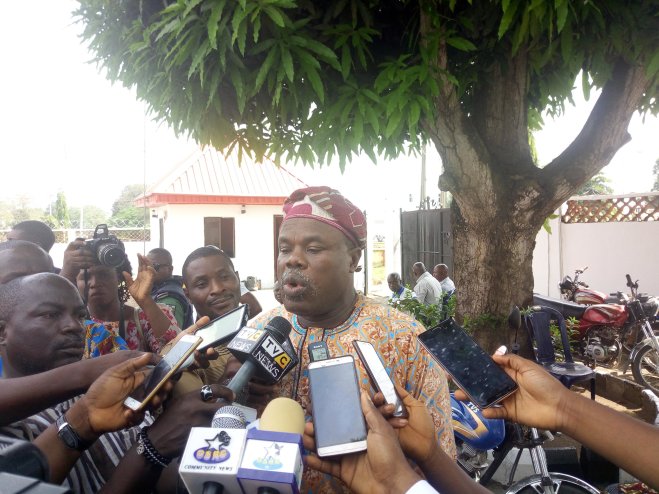 Speaker of the Ondo state house of assembly, Bamidele Oleyelogun, who was allegedly impeached on Friday by 18 of 26 lawmakers, on Monday presided over the plenary of the Ondo State House of Assembly as Speaker and went ahead with the parliamentary business amidst heavy security.
Oleyelogun held a sitting with the Clerk of the house along side 8 other members while other members were not in attendance.
Eighteen members of the Assembly removed Oloyeloogun and his deputy, Iroju Ogundeji, with Olamide George as the new Speaker and Abimbola Fajolu his Deputy speaker.
While Hon George claimed that 18 members of the Assembly signed the impeachment notice, Oleyeloogun insisted that only 16 members signed the notice, alleging that two lawmakers’ signatures were forged.
He named the lawmakers as Hon Sunday Olajide, who represents Akure South Constituency II, and Ose Constituency’s representative, Hon Olusola Oluyede at a plenary session on Monday.
During the plenary, Hon Olajide said he was neither informed nor briefed on the move by his colleagues to impeach Oleyeloogun and his deputy and called for the investigation of the act.
Similarly, Oluyede said he was shocked to find his name and signature on the impeachment notice.
“I am here to deny the rumour of the purported impeachment. I am not part of it and I cannot be part of it,” he said.
Oleyelogun, who announced the suspension of Hon George and 15 other lawmakers, declared his impeachment as null and void, urging the security agencies to arrest and prosecute them for forgery and perjury.
“In view of this, the House has taken the decision on it to call on the security agents to probe that purported signatures and names so that those involved in that forgery will be quickly brought to book.”
Reacting, the new speaker Olamide George alleged that Governor Oluwarotimi Akeredolu bribed the two lawmakers to deny their signatures on the impeachment notice.