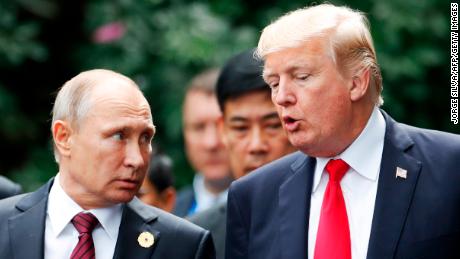 United States President, Donald Trump on
Monday ordered the expulsion of 60 Russian diplomats the US identified
as intelligence agents and the closure of the Russian consulate in
Seattle, the most forceful action Trump has taken against Russia to
date.
Of those being expelled, 48 of the alleged intelligence agents
work at the Russian embassy in Washington and 12 are posted at the
United Nations in New York, senior administration officials said.
Trump
took the action after the US joined the United Kingdom in accusing
Russia of attempting earlier this month to murder a former Russian
double agent and his daughter using a nerve agent in the town of
Salisbury, England. The action comes just 11 days after the Trump
administration leveled the first sanctions against Russia for its
interference in the 2016 US presidential election.
“The
United States takes this action in conjunction with our NATO allies and
partners around the world in response to Russia’s use of a
military-grade chemical weapon on the soil of the United Kingdom, the
latest in its ongoing pattern of destabilizing activities around the
world,” White House press secretary Sarah Sanders said in a statement.
“Today’s
actions make the United States safer by reducing Russia’s ability to
spy on Americans and to conduct covert operations that threaten
America’s national security. With these steps, the United States and our
allies and partners make clear to Russia that its actions have
consequences,” she said.
“The United States stands ready to cooperate to
build a better relationship with Russia, but this can only happen with a
change in the Russian government’s behavior.”
Sanders
also added that the closure of the Russian consulate in Seattle was
tied to the consulate’s “proximity to one of our submarine bases and
Boeing.” A senior administration official declined to say whether the US
believes Russian agents were spying on US submarine bases.
The
consulate closure and the expulsion of dozens of diplomats came on the
heels of the UK’s expulsion of 23 Russian diplomats. Fourteen European
Union member states, Canada and Ukraine also moved on Monday to expel
Russian diplomats.
Ukraine expelled
13 Russian diplomats over the incident. Canada, Germany, France and
Poland each expelled four Russian diplomats. Italy, Estonia, the
Netherlands, the Czech Republic, Lithuania, Romania and Finland also
expelled between one and three diplomats each.
“Additional
measures, including further expulsions … are not to be excluded in
the coming days and weeks,” European Council President Donald Tusk said
Monday, speaking in Bulgaria.
He
said the European Council agreed with the UK “that it is highly likely
the Russian Federation is responsible” for the poisoning.
“We remain critical of the actions of the Russian government,” Tusk added.
Senior
Trump administration officials said the actions were being taken not
only as a direct response to that attack, but also to rebuke Russia’s
“steady drumbeat of destabilizing actions.”
The
actions came less than a week after Trump spoke with Russian President
Vladimir Putin to congratulate him on his reelection. Trump did not
raise the nerve agent attack during the call, and senior administration
officials said the two leaders have not spoken since.
But
a senior administration official said the United States’ retaliatory
action was “absolutely” Trump’s decision, saying it was “something he
was involved in from the beginning and that he personally made after
several meetings with his team last week.”
The
expulsion still leaves dozens of Russian intelligence officers working
under diplomatic cover in the US. A senior administration official said
the US estimates more than 100 Russian intelligence officers are
currently in the US.
Russia said
earlier on Monday it planned to retaliate against the US if its
diplomats were expelled, with a Kremlin spokesman saying “the principle
of reciprocity will be enforced” before the US announced its plans to
expel Russians.
The move comes
about 15 months after the Obama administration expelled 35 Russian
diplomats in response to Russian meddling in the 2016 US presidential
election.