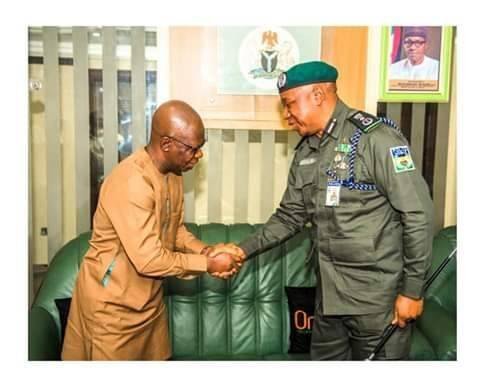 The spate of insecurity, particularly kidnapping, banditry and armed robbery currently destroying the peace of Southwest states of the country will soon be a thing of the past.

Giving the assurance in Akure on Wednesday, the Inspector General of Police (IGP), Adamu Muhammed, said plans are top gear to deploy Anti-Kidnapping Special Squad to combat the menace.

The IGP represented by the Deputy Inspector General (DIG) in Charge of Operations, Mr Abdulmajid Ali, stated this during a working visit to Governor Oluwarotimi Akeredolu at the Governor’s office in Akure, the State Capital.

The DIG who was accompanied by the Assistant Inspector General (AIG) in charge of zone 11, Leye Oyebade and the State Commissioner of Police, Undie Adie, said the squad members are currently undergoing training in Abuja and will soon be dispatched to Ondo State and other southwest states to curb crimes.

Related: Southwest Govs Condemn Calls On Fulani Residents To Go Back To North

Adamu also commiserated with the state government over the killing of Mrs. Funke Olakunri, the daughter of Afenifere leader, Pa. Reuben Fasoranti, stressing that the Nigerian police is keen on making the country safe for every Nigerian.

“I am sent by the Inspector General of Police not only to Ondo State but to other southwest states to see the security architecture on ground and as well as to see how to redesign the security apparatus.

“I decide to start with Ondo before I go to Ekiti and Osun because Ondo being one of the focus states of recent, I believe we need to sit down with my officers here and see how we can merge ahead.

“I want to let you know that the Inspector of General of Police is mindful of what has been happening particularly along the road as well as some of these miscreants disturbing the peace of the people.

“I also want you know that security is one of the first pillar of any government in doing any service to the people. If security is not provided, there won’t be peace in that area and the governor too will find it difficult to operate.

“we are aware of our responsibility. The Inspector General has put in place a very strong team that are on training now and in the next two weeks, they will be out and Ondo and other south west states have been the place of focus.

“We are deploying them here to take charge of security and to work with our men on ground. I can assure you that the place will definitely have a change because when the members of the Special Squad are around. I want to assure you that peace will reign again in Ondo state and other south west states,” he said.

Responding on behalf of governor Akeredolu, the Deputy Governor, Agboola Ajayi, said he was worried on the recent insecurity in the State and other Southwest States, saying Ondo state was not known to be a dumping ground for crimes.

He charged the Police to fish out killers of Mrs. Funke Olakunri, saying it is a debt that must be paid by the Nigeria Police.

Akeredolu noted that it is high time the police embraced digital policing fully to curb kidnapping and other violent crimes in the country.

“The police must also engage the community. This is very important. Even if you have 200,000 policemen in a community, you need the corporation of the people in that community for you to be able to carry out your job effectively”

He said the police must map out strategy to secure the boundaries and other flashpoints in the state.

The Governor assured the visitors that the State government would give necessary supports that would enable the security men to chase criminals out of the state.