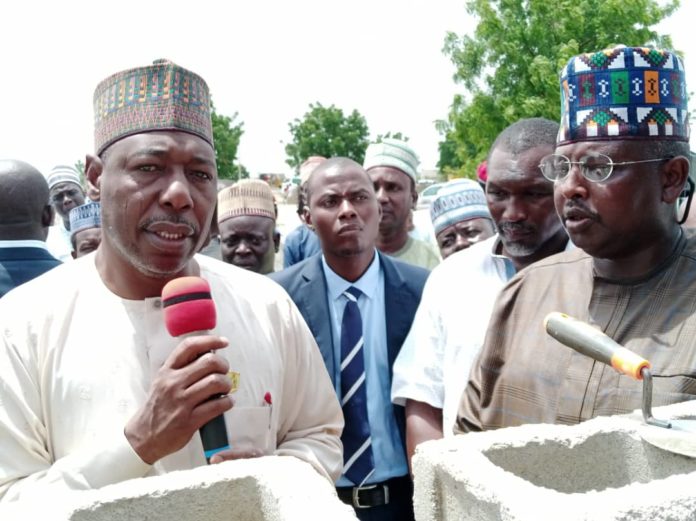 In his speech before laying the foundation and opening the plague, Prof Zulum reiterated the commitment of the Borno state Government in supporting the prestigious university and warned that the work should be qualitative and quality materials are used and assured them of more support from his administration.

“God willing, you should be expecting more houses from me” concluded the Governor

On the issue of perennial water scarcity of the University, Governor Zulum directed for a borehole to be drilled at the site and directed the Chief of staff to lias with the works department of the institution to ensure the scarcity problem is laid to rest soon.

Earlier on, Prof Muhammad Munkaila, Dean faculty of Arts of the University, who received the Governor on behalf of the Vice Chancellor, thanked the effort of the Governor in supporting the University through creating enabling environment by provisions of Shelter and water. He also urged the Governor not to relent on more of the institutions need on road constructions.

On a similar development, Prof Zulum performs foundation laying ceremony of the Male Vocational Training Center he awarded some three weeks ago at Muna Area, of Jere local government area.

The Governor after expressing his happiness over the level of work done so far, he disclosed that, as one of the cardinal objectives of his administration, similar centres will be constructed in each of all the 27 local governments of the state.

The Governor was conducted round the project site by the project Engineer, Lawan Abba Wakilbe.