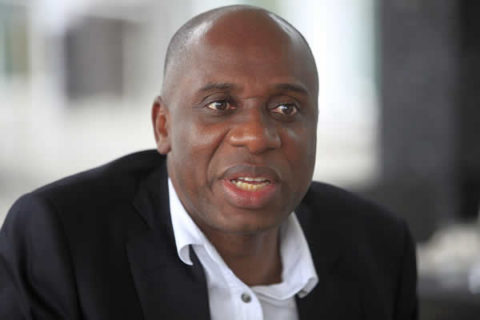 The Minister of Transportation, Mr Rotimi Amaechi, says 10 more coaches will be provided by November to address the upsurge of passengers at railway stations across the country.

Amaechi told News Agency of Nigeria (NAN) on Tuesday that the additional coaches would solve the problem of high demand for the services.

He said: ”We delivered Abuja-Kaduna, but the pressure is now high with the influx of passengers. We started with about 300 passengers, now we are doing 2,500 passengers, nearly twenty times the number.

“We placed order for some more coaches because the problem is not e-ticketing as they say, but the demand has by far outweighed the supply. By November we should be able to launch 10 more coaches to help address this challenge.”

The Minister explained that by November, two sets of Diesel Multiple Units (DMU) made up of motor car and coaches of various classes would be made available for the rail stations.

He expressed optimism that the coaches would assist in addressing the passenger surge at Abuja-Kaduna and Itakpe-Warri rail stations.

Okhiria explained that by the time the other 32 coaches and the locomotives arrived, there would be additional round trips on the various stations.

Commenting on the progress of the Lagos-Ibadan rail project, Okhiria commended the Minister of Transportation for ensuring steady and diligent supervision of the project.

He said: “It’s a good thing to come out ones every month to see the level of work they have done.

“I think our major issue now is to see how we can get to Apapa port, because without the track getting to Apapa port the idea of making this rail has not been achieved.

“As you can see, it is quiet pleasurable to travel by train, we used the narrow gauge within Apapa to Iju after which we used the standard gauge and we are very close to Ibadan.

“I think it is good to always do it like this, inspect it, since the tracks have been done, because if we don’t, people may come and start vandalising it.

“It is a good thing, they have made progress and we hope by November when the coaches come, nothing will stop us from running train till we get to Apapa.”

“For the first time, we were able to go into the Apapa wharf by train and it is all in the effort to show that whatever encumbrances there are, we will deal with them.

“This is to ensure that the target date of commissioning of this project which is January 2020 is realised.

“As we can see from Iju to Ibadan we have the tracks. In some areas the formation work has been done. We are relocating some of the narrow gauge to another place to give way for the new standard gauge.

“So generally, we are making progress but we are not very impressed with the pace of the work.”