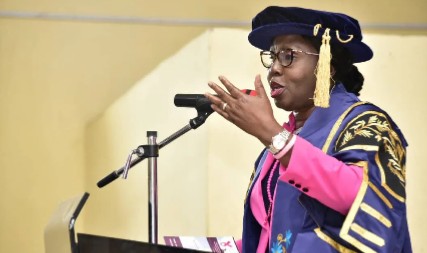 In her lecture titled: “A Stitch In Time Saves Lives: Breast Cancer Realities in Nigeria and Actionable Steps”, delivered at the 7th Distinguished Guest Lecture of the University of Medical Sciences, Ondo, Mrs. Akeredolu advocated for the adoption of a population based screening for breast cancer using the Clinical Breast Examination (CBE) at primary health care facilities nationwide.

“There is the need to adopt a holistic approach from cancer detection to treatment in order to get remarkable positive result saying if CBE services are offered at all primary health centres, there is a high chance of reaching 80perecent of the target population.

“85 percent of pregnant women receive ante natal care at health facilities and up to 74 percent have institutional delivery which indicates a high patronage of health facilities by women of reproductive age thus the reach will be wider through the adoption of CBE,” she said.

Mrs. Akeredolu affirmed that the burden of cancer is overwhelming in our clime compared to other developed countries.

While expressing worry at the trend of women presenting late at the hospital, Mrs. Akeredolu said breast cancer has one of the highest incidence rate and mortality in most part of the world, thus threatening family’s happiness.

She charged both health providers and the civil society to continue to conscientiously engage government at all levels to implement cancer care and control at their respective levels said all hands must be on deck in the fight against the scourge of cancer.

Some of the recommendations made in the lecture include the need to assert that early diagnosis of cancer significantly improve cancer outcomes and patients’ survival, and also engage religious leaders who are usually the first point of call as well as advocating better funding in state budgets for cancer control among others.

Mrs. Akeredolu also used the opportunity of the lecture to restate BRECAN’s effort in advocating better budget line for cancer control saying the State House of Assembly recently voted over $3million in the 2018 and 2019 budget to fund cancer control in the state.

The event featured presentation of “Alari” a native Ondo attire and award to Mrs. Akeredolu.

Earlier in his welcome address, the Vice Chancellor of the University, Prof. Friday Okonofua acknowledged that the university is indeed privileged to have Mrs. Akeredolu as a guest lecturer as she has remained one of the progressive voices for women in social activism saying this is the second time in the history of the university that a woman would deliver its lecture.

He further described her as an exemplary icon, a leading light and a model to many other women.