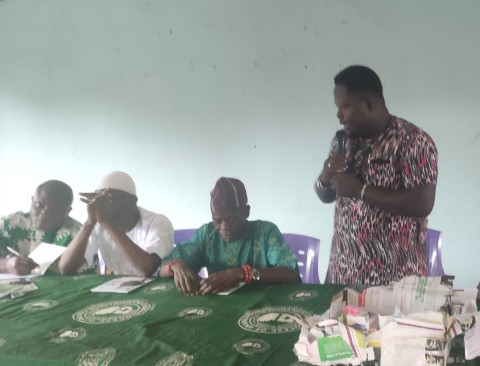 The meeting which was the first general meeting the lawmaker would be holding after his assumption of office was put in place to appreciate the unalloyed support received from the people during the past election, their commitment so far towards his success in office and also rally support for Arakunrin Oluwarotimi Akeredolu.

He specifically thanked the people for putting in so much efforts during his election which however made him break the age long jinx of winning his unit with a long margin against his opponents; the victory which he described as a great feat ever that could ever be recorded in the history of the ward.

According to the lawmaker, the cooperation received from the people so far is an assurance that the All Progressives Congress would stand tall with resounding victory in the forthcoming gubernatorial polls in the state.

He however urged the ward members to keep the focus and never give room for any loophole which might disunite them at any point.

In fulfilling part of his indebtedness, Hon Borokini gave out cash gifts, foodstuff and Exercise Books to the members to compensate and reward their loyalties as he promised undiluted representation and defense of their course at all levels.

The people appreciated the Honourable for keeping to his words and taking them as a priority in discharge of his duties with a promise of solidarity and absolute support towards his success in office. The meeting is expected to take place in other wards in his constituency in the shortest time.