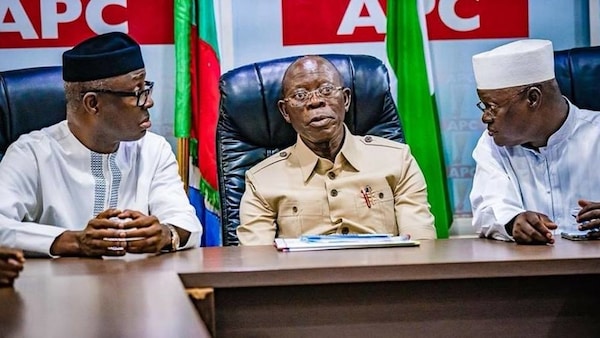 The ruling All Progressives Congress (APC) appears to be taking the first step towards the resolution of the crisis rocking it.

The crisis is threatening the position of the National Chairman of the party, Comrade Adams Oshiomhole, who was restrained by a court order on Wednesday to stop parading himself as APC chairman.

This followed an ex parte motion filed in court by a group opposed to him.

President Muhammadu Buhari, who is the leader of the party, has raised a three-man team to liaise with those who have an axe to grind with Oshiomhole.

There were indications also last night that the President might ask the National Caucus of the party to wade into the crisis.

But it was learnt that APC governors may shun the emergency meeting of the party’s National Executive Committee slated for Tuesday, March 17, because it was ‘illegally convened’ by the Deputy National Secretary, Mr. Victor Giadom.

Although Giadom summoned the meeting as Acting Secretary, his authority is no longer tenable following the appointment of Arc. Waziri Bulama as substantive National Secretary.

Besides, the APC constitution stipulates that a 14-day notice must be issued ahead of a NEC meeting and a seven-day notice for an emergency NEC meeting.

It was gathered that none of the conditions for holding a NEC meeting was fulfilled at press time.

A reliable source, who spoke in confidence, said the President and his kitchen cabinet are unhappy that his administration is being distracted by the crisis over the fate of the national chairman.

The source said: “The President has raised a three-man compact team to reach out to the governors to allow peace to reign by sheathing their swords. He also asked the team to give assurance that he will try to reconcile all.

“The team has been engaging some of the aggrieved governors and party leaders on the way forward.

“It pains the President that his administration is being distracted at a time he had rolled out plans to make a difference in his second term. He could not understand why APC has to be embroiled in an unnecessary crisis.”

Responding to a question, the source added:

“The President is contemplating convening a National Caucus meeting to resolve all grey areas and issues.

“We are hopeful that our leaders can resolve the issue at hand because the opposition Peoples Democratic Party (PDP) is about to capitalize on our differences.”

Sources also hinted on Saturday that most APC governors may not attend the emergency NEC meeting of the party because it was ‘illegally convened’.

“Go and read Section 25/(B) of the APC Constitution, it is only the national chairman of the party that can direct the National Secretary to issue notice for the NEC meeting.”

“Without prejudice to Article 25(B)(i) of this Constitution the National Working Committee may summon an emergency National Executive Committee meeting at any time, provided that at least seven (7) days’ notice of the meeting shall be given to all those entitled to attend.

“Decisions at the meeting of the National Executive Committee shall be by simple majority of members present and voting.

Bello made his position known in a statement through his Commissioner for Information, Mr. Kingsley Fanwo.

The governor said he would never do anything capable of disrupting the peace of the party.

The statement said: “Governor Yahaya Bello will never do anything that will disrupt the peace of APC.

“His interest has always been the peace and stability of the party.

“He is a true party man whose interest is the continued political relevance even beyond 2023.”

Police Inspector General Mohammed Adamu on Friday met with the two feuding sides in the APC crisis and warned them to keep off the party’s national secretariat in Abuja for now.

Soon after the group opposed to Oshiomhole obtained an interim court order restraining him from parading himself as chairman, a Federal High Court in Kano issued an interim order that the status quo in the party be maintained.

Read Also: My Absence Was On Medical Advice – Akeredolu

The development did not sit well with the anti-Oshiomhole group which vowed to resist his planned return to the secretariat yesterday on Friday.

Each side armed with a court order went to the Force Headquarters, Abuja seeking police protection but the IG could only ask them to give peace a chance and keep off the party’s national secretariat for now.

Oshiomhole led a faction of the National Working Committee (NWC) to the meeting with the IG while the National Vice Chairman, North East, Comrade Salihu Mustapha led the other group.

With neither of them willing to shift its ground at the meeting, the IG directed that the two groups should stay away from the party Secretariat.

Consequently, a team from the DSS was sent to reinforce the police detachment already at the secretariat.

The building is currently under lock and key. (The Nation)