The Precision NG
Home Politics We Don’t Know Of Any Yoruba Agenda… Fayemi Must Contest In 2023... 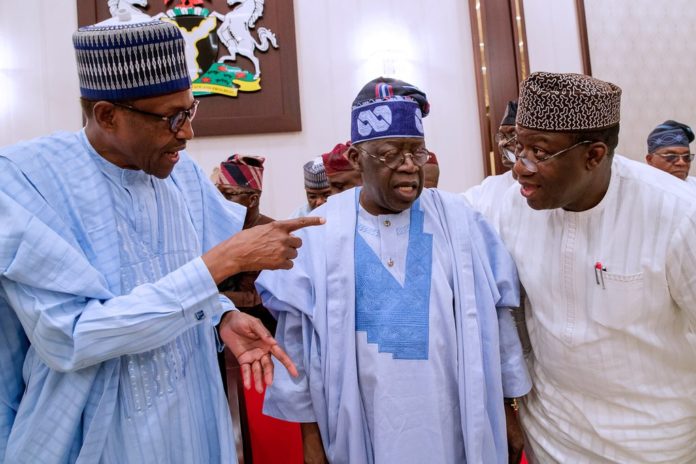 The Ekiti State Publicity Secretary of the All Progressives Congress (APC), Adebowale Ajayi, has said that the state chapter of the party is not aware of a South-West Agenda to project the National Leader of the party, Asiwaju Bola Ahmed Tinubu, for the 2023 presidency.

The party Spokesman said Ekiti is not ready to play a second fiddle this time around and the state is planning to vie for 2023 presidency position.

Ajayi further explained the reason why he is spearheading the move for State Governor, Kayode Fayemi, to join 2023 presidential race.

Read the full interview of the Ekiti APC spokesman by Vanguard Newspaper:

What informed the decision of your party to endorse Governor Kayode Fayemi?

The statement I made was my personal opinion, we have not discussed this at the state executive level, but as the state Publicity Secretary of the party, an insider, I owe it a duty to support him whenever he eventually shows interest.

And more importantly, those people who went to Oyo to meet the Alaafin and other people, (senator) Adeyeye and the so-called stakeholders, were there on behalf of Ekiti which I believe was not the right thing because most of them were on suspension, they don’t have the right to speak for the party, at least for now.

When will the party made its position known on the 2023 presidential race?

The party would definitely make its position known on the matter at the appropriate time, so it was my personal opinion and I believe that, by the time we get to that stage, the party will buy the idea and we will now talk to him to show interest. He has not told us anything, what some of us feel is what I spoke about in an interview, and I deliberately did that.

Those people who claimed to be stakeholders that dissociated themselves from the statement are on suspension, they have not been taking part in the activities of our party, they operate from outside and, as a matter of fact, they are on their own.

Let’s wait and see, when we get to the bridge we will cross it. We are all playing politics.

By the special grace of God, we are in charge of the party in Ekiti. The executive was dissolved lately and we were made to now operate as caretaker, we are still very much in charge of the party and the governor is doing well. When the time comes, we will convince him to run. Like I told you, we have qualified, notable and loyal party members in Ekiti and Governor Kayode Fayemi is one of them, we have as many as possible and that is why I said this time around, Ekiti will be showing interest. We will love that the presidency comes to Ekiti, we don’t want to play second fiddle any longer.

That is why we showed interest in the Deputy National Chairmanship seat of the party which Otunba Adeniyi Adebayo vacated but the issue has become a thing of the past now because the exco has been dissolved.

A caretaker has been instituted to prepare ground for the next convention, and we are prepared to slug it out with other South-West states.

Why the choice of Fayemi?

As far as Ekiti is concerned, Fayemi is the most qualified, he has the capacity and he is very diligent. We are dragging him to contest the presidential race because he has done very well in Ekiti.

He brought back the glory of the state. We know how the immediate past administration ran the state aground but because of the quality leadership brought by Fayemi people are now respecting Ekiti as the ‘Fountain of Knowledge’.

Are you aware of a South-West Agenda, raised by some prominent Yoruba figures to project the National Leader of your party, Asiwaju Bola Ahmed Tinubu, for the 2023 presidency?

I don’t know what we have as South-West Agenda. What I know is that Ekiti will vie for that position (presidency) after the convention. Tinubu has not told us in Ekiti that he is running and, like I said, Ekiti is not ready to play a second fiddle this time around. As far as Ekiti is concerned, we are not aware and, if Tinubu is running, when we get to the bridge we will cross it.

‘Stakeholders’ have accused your caretaker exco of being unfair and unjust. What is your take on this?

That is their opinion and, as a democratic party, we have been fair to everybody in the party.

What I would say is that all of them, and particularly some of members of the ‘Stakeholders’, who would parade themselves as APC in Ekiti and PDP in Kwara, should be progressive? What justice do they want? Some of them are double dealers now accusing the party of being unfair.

More importantly, they are suspended members of the APC; they have no locus to challenge the party.

Ekiti APC has no faction, they are members of APC outside and when one of them went on air to say that Governor Fayemi has been suspended from the party, the National Secretariat of the party nullified the action immediately, that they have no locus but here in Ekiti there was a disciplinary committee set up on the directive of the national executive that those people who are recalcitrant, who went to court should be disciplined for flouting the order of the NEC.

We immediately set up a disciplinary committee and that body recommended their suspension and that action has been ratified by the national executive.

Any chances of reconciliation before 2023?

The el-Rufai committee met at the National Headquarters and submitted its report to NEC. The committee is aware that there is no crisis in Ekiti APC. If any of them has any issue with Governor Fayemi, they should go and resolve it with him, rather than bringing it to the party.