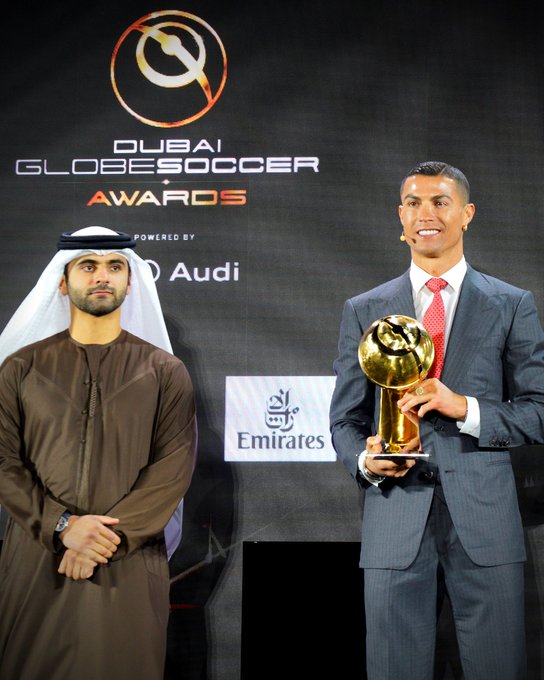 Cristiano Ronaldo and Pep Guardiola were honoured at the Globe Soccer Awards in Dubai, the duo named player and coach of the century respectively.

Juventus forward Ronaldo picked up the award in person at a ceremony held at the Armani Hotel on Sunday, beating longtime rival Lionel Messi to the prize.

The 35-year-old, who has won domestic league titles in Spain, England and Italy and Euro 2016 with Portugal, admitted his pride at receiving the accolade, given to the player judged the best between 2001 and 2020.

“It’s a pleasure to win titles,” said Ronaldo, a five-time Ballon d’Or winner, at the event.

“It’s not easy to be top of the game for so many years. I am really proud, but without a team, great coaches and clubs it is not possible.”

Ronaldo would also respond on Twitter , saying: “Couldn’t be happier with tonight’s award! As I’m about to celebrate my 20th year as a professional footballer, Globe Soccer Player Of The Century is a recognition that I receive with so much joy and pride!”

Guardiola was honoured for a managerial career which has seen him win league championships in Spain, Germany and England, as well as the Champions League twice.

The Manchester City boss was not present at the gala, though he accepted the award via a pre-recorded video message.

Both Ronaldo and Messi missed out on the men’s player of the year award for 2020, however, as that went to Bayern Munich striker Robert Lewandowski.

Bayern’s treble of the Bundesliga, Champions League and DFB-Pokal also saw boss Hansi Flick rewarded as coach of the year.

Real Madrid were named the club of the century at the ceremony, while Bayern picked up the team award for 2020.

Jorge Mendes was named agent of the year for 2020, winning the award alongside his longtime client Ronaldo.

The Globe Soccer Awards, founded in 2010, acknowledge excellence in football with an annual gala dinner and awards ceremony. (Goal.com)