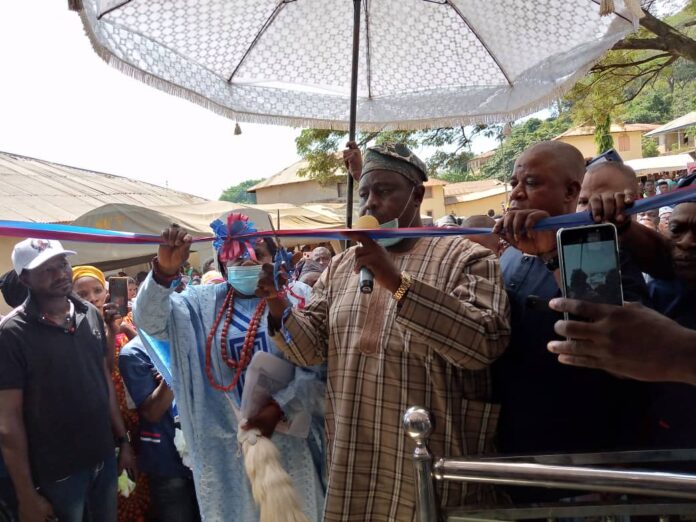 During the commissioning of the edifice, Akeredolu said the late monarch was an altruistic Royal Father who conspicuously pursued the cohesion of his community.

The Governor who was represented by the Secretary to the State Government, Hon Tayo Oluwatuyi, stated that demise of Owa-Ale ran a cold shiver down his spine, while noting that the Monarch was a lover of the majority.

Oluwatuyi, said he will unequivocally tender the Community’s request before the Governor, while describing him as “talk and do”.

Part of the requests are the reconstruction of Okela-Eshe-mount Camel to Arigidi road among others.

Earlier, the Regent of Owa-Ale, Princess Aderinsola Olabisi Adedoyin, extolled the good deeds of the Governor over his immense support and encouragement during the lifetime and the demise of the foremost Monarch.

The Regent said, “My special appreciation goes to Your Excellency for your supports and encouragement during the lifetime and even after the demise of Kabiyesi”
“Whilst some may think that all the supports of the Governor provided for late Kabiyesi during his lifetime were mere eye-service but the thoughts and action of your Excellency after Kabiyesi’s demise speaks otherwise.”

Princess Adedoyin, however, hailed Govenor Akeredolu over the construction of a twin carriage road which had in turn reduced incessant accidents in the ancient town.

A renowned Group, Igirioke Community Development Association, presented public address system worth of thousands of naira as part of their own contributions to the befitting palace Hall.

In a similar development, the Cherubim and Seraphim Church in the Community donated an undisclosed amount of money tagged as financial support.

The duo also urged the inhabitants of the town to ensure peaceful conducts and eschew any acts of violence, adding that Oba Adedoyin bears the trademark of tranquility.