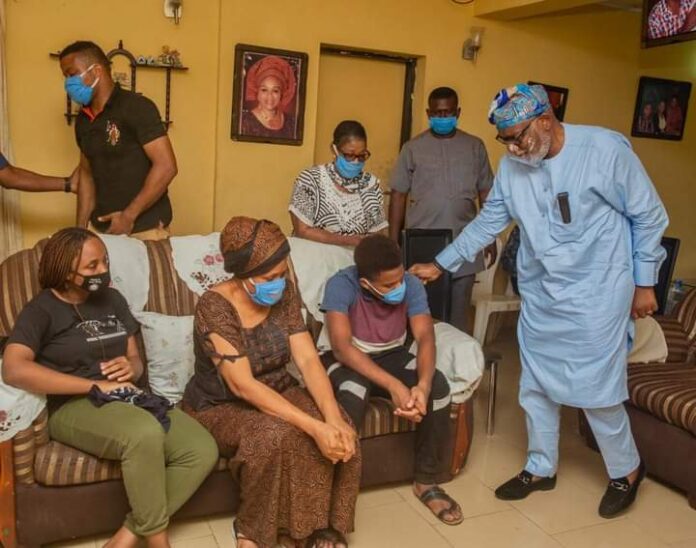 Speaking at the Obafemi Awolowo University, Ile-Ife campus residence of the late Professor, Governor Akeredolu described him as a thoroughbred academic whose core interest in Bitumen Exploitation and Exploration would forever make him a great loss to Ondo State in particular and Nigeria as a whole.

The Governor said the late Professor of Chemical Engineering was one of the high ranking experts on bitumen in the country, adding that it is regrettable he won’t be around to witness the gains of the bitumen exploration in Ondo State.

While noting that the late University Don was a humble man with the manner he mixed with people at the grassroots in the course of politics, Arakunrin Akeredolu stressed that he will be sorely missed by all.

“We know of his exploit in Afenifere renewal group. He was our senatorial chairman when we came into politics. He has done well. Not everyone who came worked as an academic ended up as a Professor. He has a lot of pluses to his name. He has made an impact in academia and politics. He was a leader in his own right.” the Governor said.

He enjoined the family members to bear the loss in total deference to the will of God, saying that the Professor died in active service of his fatherland as the Honourable Commissioner for Regional Integration and Special Duties and as such would be accorded a befitting burial.

The wife, Mrs Yetunde Ademodi described her husband as a committed person who never wavered from the course of his conviction.

While thanking the Governor for the condolence visit a brother of the deceased, Mr Funmilayo Ademodi assured that the State Government would be contacted on burial arrangement for the late Commissioner.