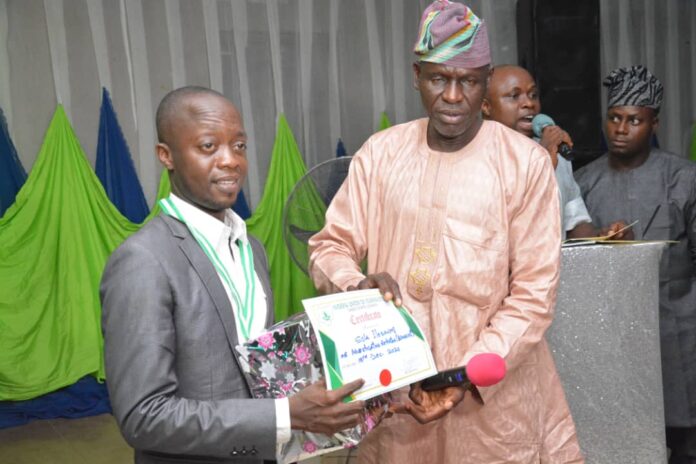 Shola Ilesanmi, an ace reporter with the Ondo state Radiovision Corporation (OSRC), has been named the Investigative Reporter of the Year in Ondo state.

Ilesanmi’s daring, exclusive and revealing expository report had laid to rest controversies on the Akure explosion in March 2020.

Shola was honoured alongside many of his colleagues at the 2020 Ondo State Nigeria Union of Journalists, NUJ Dinner and Award Nite to climax the weeklong celebration by pen pushers in the state.

The Akure explosion with devastating effects on residents of Iluabo and Eleyowo axis of Akure-Owo road where it happened, had sparked global controversies on the actual cause. Some scholars and geoscientists had concluded the incident was an asteroid attack.

With a lead that a truck conveying explosives was responsible for the explosion, Shola successfully tracked and conducted an exclusive interview for the driver.

His exclusive with the driver broke the ice as the revelations punctured claims by scholars on the cause of the blast.

Also, shortly after the report, the owners of the explosives visited the victims with a promise to compensate them within their available resources.

The incisive report laid to rest the debate on the cause of Akure explosion, said Ondo NUJ secretary, Prince Leke Adegbite who announced Shola as the winner of the Investigative Award category.

Also at the ceremony, two of his colleagues at the OSRC Media Group, Zaheed Aribisala and Bimbo Agboola clinched awards in the Grassroots Reporter and Cameraman of year Categories respectively.

Zaheed’s story on the growing practice of Tomatoes cultivation in Ondo state beat other reports in the Grassroots Category while Bimbo’s spontaneous capture of an accident scene involving a Timber Lorry known as ‘Agbegilodo,’ a report also produced by Shola Ilesanmi, earned him the cameraman of the year.

Reacting to the Award, Shola who had earlier been named 2020 Outstanding Journalist of the Year by Chronicle Magazine and Ondo State Media Award, said he was grateful for another recognition from the Media.

“It is always fulfilling to do impactful stories which will help make society a better place. I am grateful to God for the wisdom and my organization for the platform to always bring to bear my talents”.