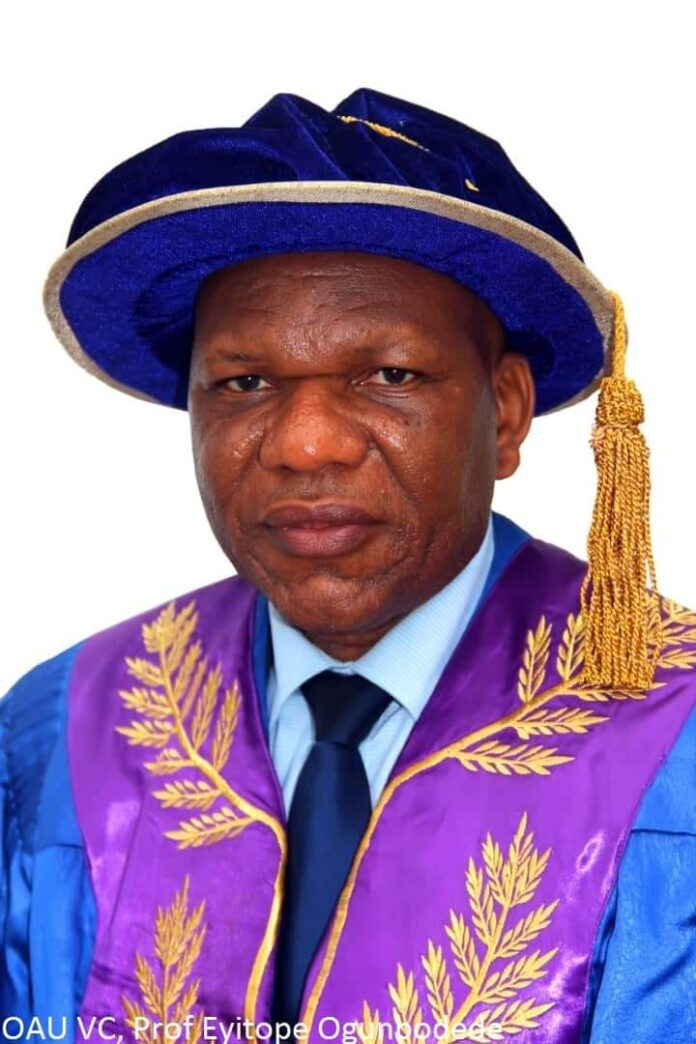 Prof. Ogunbodede raised the alarm on Monday in Ile Ife during a press briefing.

The VC warned that unauthorised persons found within the lands of the University, would be treated as criminals.

“We hereby wish to warn ANYBODY OR ANY GROUP OF PERSONS who may want to forment any trouble that law enforcement agencies have been officially briefed about this development,” he said.

Gentlemen of the Press, I call you all here today, to formally inform Nigerians and the entire world, through your different media organisations, about the recent happenings between our University and some land speculators/land grabbers within the Ile-Ife Community.

Precisely in 1961 when this University was founded by the government of the then Western Region of Nigeria, the Ooni of Ife, His Imperial Majesty, Oba Adesoji Aderemi who also doubled as the Governor of Western Region, with the support of the Ife Community donated the land on which Obafemi Awolowo University (OAU) is now situated. The University occupies a land area of Eleven Thousand, Nine Hundred and Sixty One (11,961) hectares.

Let me say here that before this time, nobody has ever ventured or encroached into University land until recently when some land grabbers audaciously insisted that “the land given to the University by the founding fathers was too much, and that OAU should be ready to forgo the portion around Parakin axis of Ile-Ife”.

Lo and behold, what we initially thought to be rumour now turned into reality as we discovered later that some people have not only encroached into the land, but have been brazenly selling it to individuals who have now started erecting some structures on it.

The Council had directed at the June 2019 meeting that Management should approach the External Solicitors to issue a Caveat Emptor on behalf of OAU. The Caveat Emptor was published in the Punch and Nigerian Tribune Newspapers of August 8, 2019. A group of Ife Chiefs published a rejoinder/paid advert in the Nigerian Tribune of 15th of August, 2019. However, the Ile-Ife Royal Brothers Club also issued a Press Release and advertorial in the Informant of 26th August to September 1, 2019 condemning the sale of University land “by any individual, group or personality” and asserting that “the sale of the land meant for the overall development of Ile-Ife by few greedy individuals should be roundly condemned”.

Exploring the cordial relationship between the University and the Ife Community, the University Management led by the Pro-Chancellor and Chairman of Council, engaged HIM Ooni Adeyeye Enitan Babatunde Ogunwusi, Ojaja II and the leadership of Ife Community in dialogue. Letters had also been written to His Imperial Majesty in addition to official discussions by the Council Chairman and the Vice-Chancellor. It was erroneously believed that the issue had been resolved. The said land, although clearly gazetted as University land and on which the University had exercised ownership for decades without let or hindrance, was forcefully broken into by the same set of people on 3rd April, 2019, and the University dam was poisoned. This led to the death of fishes and other aquatic animals. Following this incident, the intervention of the police and other security agencies reduced activities on the land for some months, until very recently. It is obvious that drastic but legal measures must be taken to reverse the trend and prevent any future encroachment.

Accordingly, with an express mandate from the Federal Government and the marching order from the Honourable Minister of Education, Mallam Adamu Adamu, we had already sensitized the general public, particularly by airing Radio Jingles in all the Radio Stations in Osun State, and to also warn those who have been misled into buying government land, that the Federal Government is not only prepared but ready to secure the University land. All illegal and encroaching structures will have to give way as the University is not ready to cede an inch of its gazetted land. The University intends to start with the first phase of securing the land by fencing the entire area. While we agree that it is important to remain friendly with the local communities around the University, it is necessary at the same time to protect the legacy of the landed property of the University.

Gentlemen of the Press, in strict compliance with the directive of the Federal Government, every machinery has been set in motion to secure the University land without any fear or compromise. We hereby wish to warn ANYBODY OR ANY GROUP OF PERSONS who may want to forment any trouble that law enforcement agencies have been officially briefed about this development.

I thank you all for listening and wish you the compliments of the season.