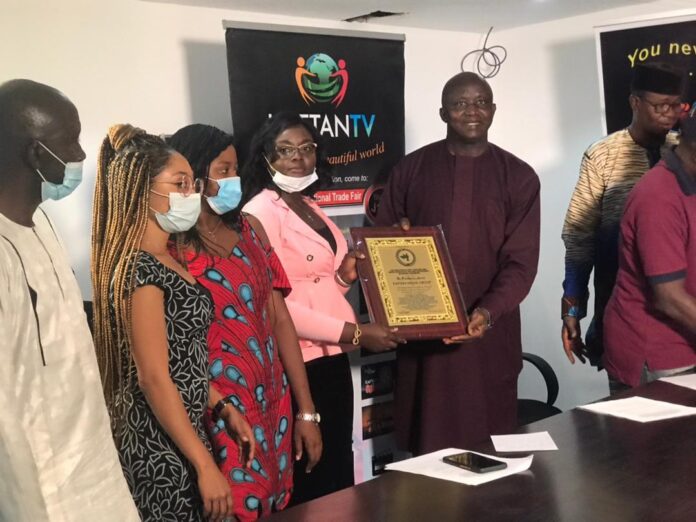 Nigeria-based KAFTAN TV has scooped a major award for its professional coverage of COVID-19 pandemic in Africa.

Presented by the Coalition of Civil Societies & Media Executives for Good Governance in Nigeria (COCMEGG), the award-winning station bagged the honour which recognises media excellence on the coverage of COVID-19 pandemic at a ceremony which held at the Abuja Station of the company.

KAFTAN TV’s Abuja Head of Station, Funmilayo Oso, led a team of staff members to the event to receive the award on behalf of the organisation.

While speaking at the presentation, the President of the Coalition, Omoba Aigbegbele said KAFTAN TV had saved lives through its accurate reportage and timely sensitisation.

“We have registered with great degree of satisfaction how KAFTAN media and broadcast via satellite and webcasting has been sent to national and international viewers in the way that create the much-needed awareness against the dreaded COVID-19 Pandemic which indeed has changed the landscape of broadcasting and webcasting including digital programming like never before.

That’s why we are here today to honour KAFTAN TV and to give honour to whom honour is due. We have registered,” he concluded.

While receiving the award, the Head of Station, KAFTAN TV, Funmilayo Oso, promised that the company would continue to implement its duties to Nigeria and international community diligently.

“We appreciate the entire members of COCMEGG for this award. The awards further prove that the 24-hour pan-African news content can favourably compete on the global scene.

KAFTAN TV has come a long way in a short while, and these awards are recognitions of the fantastic achievements of everyone in the company,” she stated.

The award is one of the numerous recognitions KAFTAN TV has received in Nigeria for its programming, with an audience of more than 1 million viewers on its two channels within and outside the country.