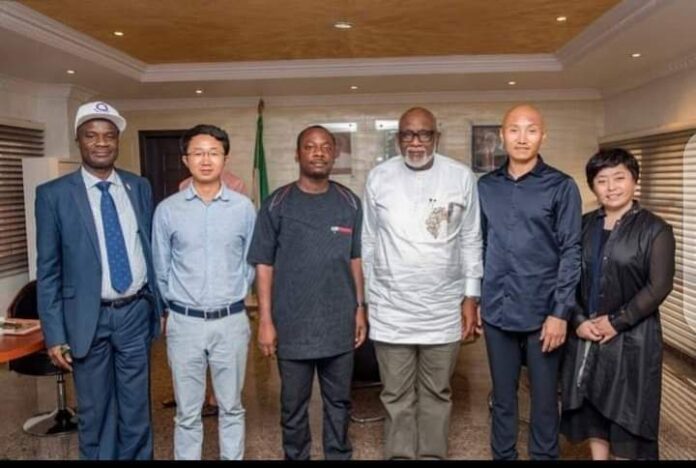 Governor of Ondo State, Oluwarotimi Akeredolu and the CEO of KLICK KONNECT NETWORKS, Chief Alex Ajipe have congratulated the People’s Republic of China and WEEWOOD Group on the new year celebration.

Akeredolu in a statement personally issued by his Chief of Staff, Olugbenga Ale commended the People’s Republic of China, the Mayor of the Linyi Province and the entire Chinese Business Community for the incredible work ethics and enterprise of the Chinese partners in the state.

“Our partnership with the Linyin Investors, following our visit to the Linyin Province midwived by an indigenous company, Klick Konnect Networks international Ltd in June 2018 birthed the most successful outcomes on industrialization witnessed in ondo state since inception, within the space of less than three years”.

“The collaboration has given rise to some thriving industries such as a high capacity cassava to ethanol factory, a wood processing factory, a textile factory, an automobile assembly plant, amongst several other existing industries, and created investments opportunities in their thousands, especially amongst our youths and women.

“These have equally expanded our agricultural base, benefited local communities through corporate social responsibility and opened up several value chains across other sectors in Ondo State,” the statement read.

Meanwhile, Ajipe has praised the state governor, Olúwarotimi Akeredolu for his incredible focus, integrity and determination to nurture from inception the opportunity of collaboration with the Peoples Republic of China especially from the Linyin City in the Shandong Province of the People’s Republic of China as presented by Klick Konnect Networks during an investments tour of the Linyin City which was facilitated in 2018.

Ajipe noted particularly that the governor has over the years, fulfilled his promise to ensure an enabling environment for investors in Ondo state and give them the much needed support to grow their businesses and create employment opportunities for the people of the state.

He rejoiced with the People’s Republic of China for the new year celebration and also acknowledged and appreciated the diligence and serious mindedness of the investors that make up Ondo Linyin industrial hub in Ore Chief of which is WEEWOOD Group whilst praying that the new year births greater opportunities, innovation, expansion and Restoration.