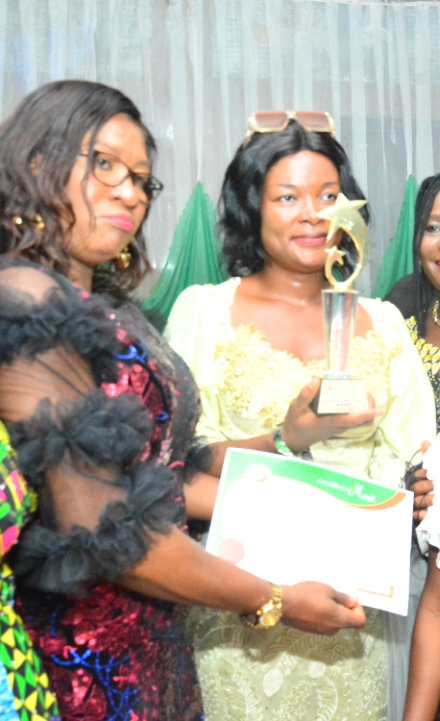 The Special Assistant on Media to Ondo State Governor, Miss Mary Agidi has been honoured with a Professional Excellence Award by the Nigeria Association of Women Journalists, NAWOJ.

The award was bestowed on her at the Dinner and Award Ceremony to mark the year 2021 NAWOJ week, in recognition of her unrelenting zeal to be at the top of her career regardless of her physical condition.

According to the State Chairperson of NAWOJ, she was selected for the award due to her contributions to the Society, service to humanity, and as an outstanding Nigerian who against all odds, shine bright in the field of journalism which brought her to the limelight to earn a political appointment.

She disclosed that the award ceremony wasn’t a money-making one, hence reason only three recipients was selected, two out of who are female Journalists, saying the association had been celebrating successful people in other professions, and now decided to celebrate their own who have been able to break barrier against all odds.

Agidi, a Publisher of an online news, JATS ONLINE NEWSPAPERS @ www.justambitioustoserveinfo.com, started her career over 10 years ago with The Hope Newspaper before her appointment few months ago by Governor Oluwarotimi Akeredolu, SAN, after she was discovered by the wife of the Governor two years ago through her online platform.

At the award ceremony held at the NUJ Pen House Alagbaka on Thursday, the Ondo First Lady, Arabinrin Betty-Anyanwu Akeredolu described it as a well-deserved recognition.

Represented by her Senior Special Assistant on Media, Oluwatobiloba Fademi, the Ondo First Lady whose office Miss Agidi is attached to, said: “This award, well deserved, would spur and encourage others”.

She commended Ondo NAWOJ for keying into her widow’s care initiative by also touching the lives of widows in their little capacity, noting that all her programmes are gender-friendly.

“I am committed to supporting initiatives that will enhance and advocate for women empowerment. Women must support women. We must join hands to build a confident and empowered future generation.

“As professional female journalists, I urge you to continue to discharge your duties in conformity with the ethics of your profession and also continue to join your voice with other female-oriented organisations in curbing and stopping social menace against women.

“Let me acknowledge every woman working hard to be the best in her chosen profession; it is worthy to note that the Oluwarotimi Akeredolu SAN led administration of Ondo State will continue to support and encourage different recognised unions and bodies who are channelling good causes”, Mrs Akeredolu said.

The National President of NAWOJ, Mrs Ladi Bala who congratulated the two female Journalists who were award recipients, noted that gone were the days journalism was meant for only men, saying so many female Journalists are now holding leadership positions in the profession.

She urged women to develop the capacity to grow and have good content to represent themselves well in the society.

Presenting her the award, the immediate past state Chairman of the Nigeria Union of Journalists, NUJ, Comrade James Sowole attested to her doggedness and zealousness in the field of journalism both within and outside Ondo State.

Responding to the award, Miss Mary Agidi thanked NAWOJ for the recognition:

“I’m overwhelmed, highly honoured and happy to receive this award; I didn’t see this coming so soon and that’s why I’m thankful to the First Lady of Ondo State for discovering me and bringing me to the limelight”.

She noted that the recognition served as an encouragement for her to keep doing what she loved to do, adding that she never knew her ability and effectiveness were being noticed.

Dignitaries in attendance included the only female Lawmaker in the state House of Assembly, Hon. Favour Tomomewo; Special Assistant to the Governor on Gender, Research, and Documentation, Mrs Ngozi-Igbo; another Special Assistant to the Governor, Mrs Ronke Adeyemi; Publisher of The Trace Magazine, Mr Ebenezer Adeniyan, men and women in the field of journalism, among others.

The award ceremony was in honour of three recipients, including Mrs Odunayo Ajo-Sawyer of OSRC television, and Mrs Rhoda Makinde, founder of DROMI NGO.