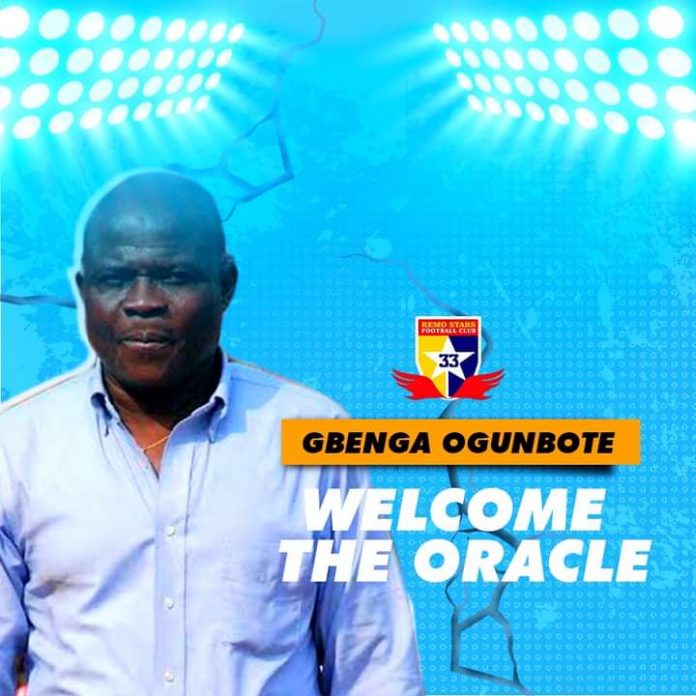 Nigeria Professional Football League, NPFL side, Remo Stars Sports Club have announced one of the veterans in Nigerian football coaching system, Gbenga Ogunbote as the new Head Coach of the club.

Media Manager of Remo Stars, Oladimeji Oshode in a statement disclosed that Ogunbote fondly known as ‘The Oracle’ signed a year deal with the club to take over from former coach, Daniel Ogunmodede who led the team back into the Nigeria Professional Football League, NPFL.

The Oracle who has been into coaching for decades has formerly tutored fellow southwest clubs like Gateway United, Shooting Stars Sports Club, 3SC and Sunshine Stars of Akure.

He was also in charge of former League Champions, Rangers International when the Flying Antelopes came from three goals down to beat Kano Pillars to the AITEO Cup crown in 2018.

Speaking with RSFC Media, Ogunbote said he is proud and happy to have joined Remo Stars FC, and currently hoping to take the club to higher levels.

“I am very proud and happy to have joined Remo Stars, I hope to help the team to the level at which the club wants to ascertain.”

“We have an ambition this season, before now the club has decided to maintain their stay in the NPFL which is my desire too but I will be so grateful if we go on to win the league or probably get a slot in any of the CAF competitions.”

In the same vein, the Chief Executive Officer of Remo Stars, Mr. Lukmon Ogungbefun welcomed Gbenga Ogunbote to the club and promised to support him to the fullest in achieving greatness for the club.

“I welcome Coach Gbenga Ogunbote to Remo Stars and I promise on behalf of the management that we will support him to the fullest.”

“We want to ensure we remain in the league hence the appointment of Coach Ogunbote, and we are optimistic that he will lead the team to greater heights.”