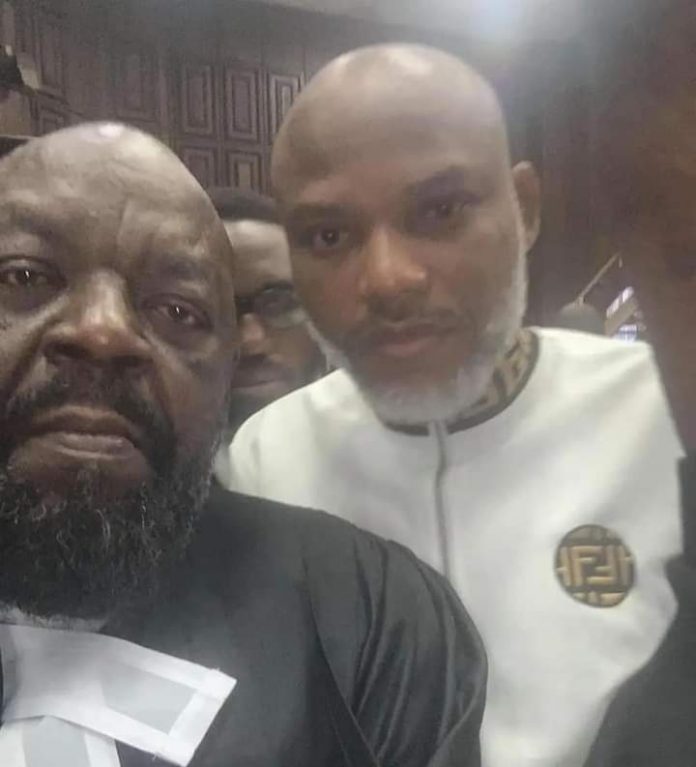 Picture shows Kanu and his Lawyer in Court on Thursday, October 21.

The embattled leader of the proscribed Indigenous People of Biafra (IPOB), Nnamdi Kanu was on Thursday re-arraigned at the Federal High Court in Abuja.

When the charges were read to him, he pleaded not guilty to the seven amended charges preferred against him by the Federal Government.

Kanu said he was innocent of all the allegations levelled against him.

The Federal Government had recently amended the charges against him raising them to seven counts as against the five counts he was previously being tried for. The new charges border on treasonable felony and terrorism.

Before the start of the trial, Journalists were denied entry into the courtroom.

Although Channels Television’s correspondent and six other journalists, were cleared at the main gate of the court to enter the premises, upon arrival at the door leading to the courtroom, armed DSS officers denied the journalists entry.

The operatives insisted their action was based on “order from above”.

Meanwhile, a source inside the courtroom, notified court reporters that the embattled IPOB leader took his fresh plea to the seven amended charges at about 10:45am.

The trial was later said to have been adjourned to November.

The FG had in the mended charge marked FHC/ABJ/CR/383/2015, which was signed by a team of government lawyers led by the Director, Public Prosecution of the Federation, Mr. M. B. Abubakar, alleged that Kanu had in furtherance of an act of terrorism, issued a deadly threat that anyone that flouted his sit-at-home order should write his or her will.

FG alleged that as a result of Kanu’s directive, banks, schools, markets, shopping malls, fuel stations were not opened for businesses, with vehicular movements grounded in the South East region of the country.

It said the action amounted to an offence contrary to and punishable under 1(2) (b) of the Terrorism Prevention Amendment Act, 2013.

FG alleged that Kanu had “on or about the 28th April, 2015 in London, United Kingdom did in a broadcast on Radio Biafra monitored in Enugu, Enugu state and other parts of Nigeria within the jurisdiction of this honourable court, referred to Major General Muhammadu Buhari, GCON, President and Commander in Chief of the Armed Forces of the Federal Republic of Nigeria as a paedophile, a terrorist, an idiot and an embodiment of evil, knowing same to be false and you thereby committed an offence contrary to section 375 of the Criminal Code Act, Cap C. 38 Laws of the Federation of Nigeria, 2004”.

He was alleged to have committed treasonable felony, an offence punishable under Section 41(C) of the Criminal Code Act, CAP C38 Laws of the Federation of Nigeria. He was alleged to had between 2018 and 2021, through Radio Biafra, professed to be a member of IPOB, a proscribed organization in Nigeria, and thereby committed an offence punishable under section 16 of the Terrorism Prevention Amendment Act, 2013.

In count five of the charge, FG alleged that Kanu had on April 22, 2021, in London, United Kingdom, on Radio Biafra monitored in Enugu and other parts of Nigeria, did an act of terrorism “in that you incite the other members (followers) of the Indegenious People of Biafra (IPOB), a proscribed organization in Nigeria, to look for security personnel, their family members through a Radio Biafra on 102.1FM monitored through the IPOB Community Radio, and you thereby committed an offence contrary to and punishable under section 1 (2) (h) of the Terrorism Prevention Amendment Act, 2013.

Attached in support of the amended charge dated October 14, included a seven-paragraphed affidavit of completion of investigation deposed to by one Loveme Odubo, a prosecutor in the Federal Ministry of Justice. (ChannelsTV)