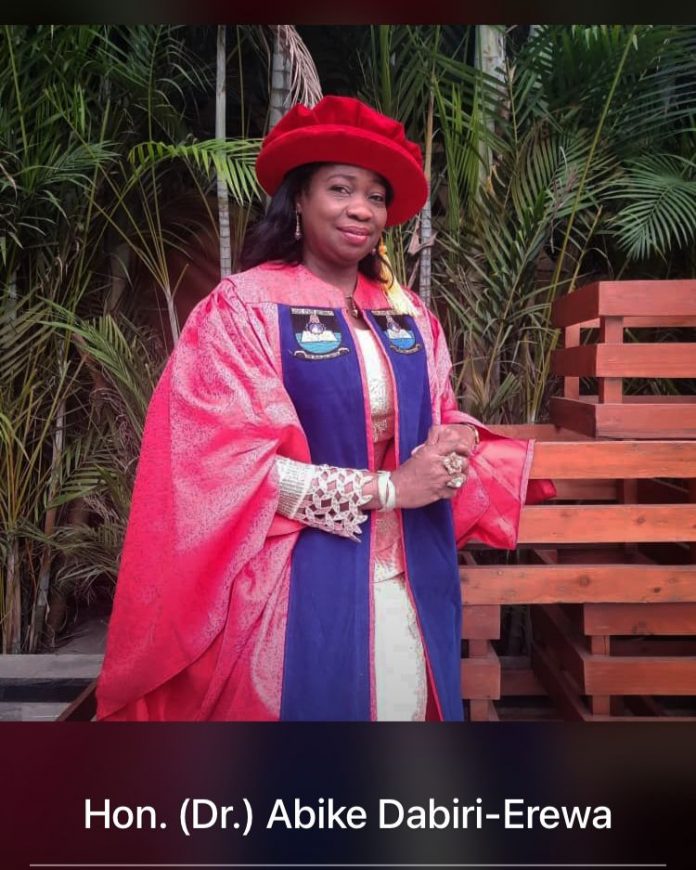 The Chairman and Chief Executive Officer of the Nigerian in Diaspora Commission (NiDCOM), Hon. Abike Dabiri-Erewa has been conferred with an honorary degree (honoris cause) by the Council of the Lagos State University (LASU).

The NiDCOM boss was conferred with the award at the convocation ceremony of the University held on Thursday in Lagos.

The foregoing verse further confirms to me that it is only Allah, our uncreated Creator that can only honour we the homo- sapiens creatures of His. Irrespective as human beings tried, the Creator must sanction such honours and put the thoughts and actions in human beings to implement.

So when the letter of honour came to the Chairman/CEO, Nigerians in Diaspora Commission (NIDCOM) Hon. Abike Dabiri-Erewa that the authorities of Lagos State University, (LASU), Ojo, Lagos has deemed it fit to bestow on her the Honourary Doctorate Award during its 25th Convocation ceremony on Thursday March 24, 2022, it was one honour too many and an award well deserved. To all those who have been following the selfless and proactive impactful life of Hon. Kafayat Abike Dabiri-Erewa, one will see that it has been rewarded and appreciated with too many awards, honours and recognition of excellence too numerous to list. As at my last count, apart from those she rejected, I have counted well over 300 received since she became a public officer in 2003 to date.

Permit me to list some of the major ones here for record purposes:

SOME AWARDS AND RECOGNITIONS

42.An Award of Excellence in Public Service from Business Day.

In all of these awards, there is a high sense of fulfillment and elation that comes to one, when one’s community honour a person. This is what Hon. Abike Dabiri-Erewa must have felt when she was given award during the 30th Ikorodu Oga Day by the Ayangburen of Ikorodu Kingdom, His Royal Majesty, Oba (Engr.) Kabir Adewale Shotobi, for lifting the standard of Ikorodu, Lagos State and Nigeria, as a good Ambassador.

Of all these awards, honours and recognitions since 2003 till date, none has change the nomenclature of her title than this latest one, hence its uniqueness.

In the letter of nomination to her which was personally signed by the Vice Chancellor of the institution, Prof. Ibiyemi I. Olatunji-Bello mni said” the conferment of Honorary Doctorate Degree on you is in recognition and appreciation of your immense contribution towards the development of the Lagos State University and by extension, Lagos state in particular.”

I hereby join numerous well wishers to felicitate with Hon. (Dr) Abike Dabiri-Erewa on her conferment of Honorary Doctorate Degree from the prestigious Lagos State University and pray that more laurels await her in her future endeavours.

Like the Director General, World Trade Organisation (WTO), Dr. Ngozi Okonjo-Iweala said in an interview segment with Hon. Abike Dabiri-Erewa, during the 2021 National Diaspora day celebration, that what was the secret to her success; which she replied: “when you are doing something you are passionate about, you will surely succeed”.

So being passionate to what you do, and believe in, will surely produce something out of nothing; even in the presence of obstacles.

For the indefatigable Dr Abike Dabiri-Erewa, she is a firm believer that there are no alternative to hardwork. Despite several challenges, she has managed to rise above it all to put the Nigeria Diaspora on the global map. This mantra of hers, has set the pace for others to follow through her relentless, energy and doggedness in service delivery to Nigerians in the Diaspora.

… ” Indeed, Allah has chosen him over you and has increased him abundantly in knowledge and stature. And Allah gives His sovereignty to whom He wills. And Allah is all-Encompassing [in favor] and Knowing.”

Signed .
Abdur-Rahman Balogun is the Head of Media, Public Relations and Protocols of NIDCOM, Abuja.
rahmor2001@yahoo.com
08052729751.