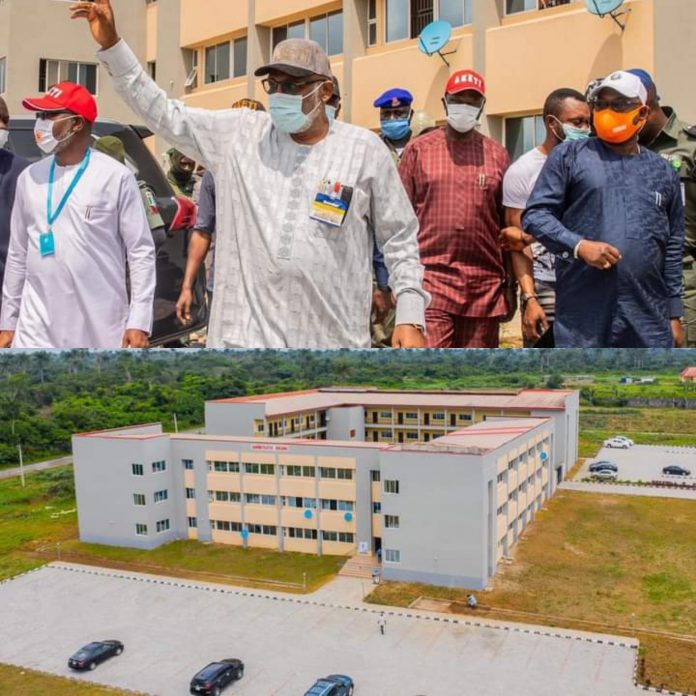 The Pro-Chancellor and Chairman of Governing Council, Olusegun Agagu University of Science and Technology Okiti-pupa, OAUSTECH, Prof. Akinbo Adesomoju has lauded the Governor of Ondo State, Arakurin Oluwarotimi Akeredolu, SAN, for turning around the fortunes of the once-moribund University to a cynosure of all eyes.

Prof. Adesomoju gave the applause while giving his speech at the commissioning of some recently completed projects in the University on Tuesday, 8th March, 2022.

“Please permit me to specially appreciate our Visitor and Governor of Ondo State, Governor Akeredolu. His passion for development and fairness has resulted in the positive change of the fortunes of this formally moribund University, despite the very harsh economic situation nationally and globally,” Adesomoju stated.

The Pro-Chancellor recalled that the outgone Governing Council which was inaugurated on the 13th March, 2018 by Governor Akeredolu has the mandate to ensure that the University moved towards realizing its vision to be a leading internationally recognized University.

He explained that as at the time of the inauguration there was grave infrastructural deficit in the University and which was nothing to write home, adding that the Frontal Fence of the University was an eyesore, with the main campus littered with uncompleted buildings.

“I am very happy that the narrative has now changed to an emerging citadel of learning through the support of Ondo State Government under the outstanding leadership of Arakurin Oluwarotimi Akeredolu, SAN.”

The Chairman of Governing Council stated further that the release of a Special Capital Grant of 500 million Naira (less 12% mandatory tax) in 2018 by Akeredolu-led Government facilitated the completion of the University Auditorium, Main Administrative Building and the University Library which were commissioned by Mr. Governor in August 2020.

Prof. Adesomoju informed his audience that the Governing Council and Prof. Sunday Roberts Ogunduyile-led Management worked assiduously to ensure that the University was enlisted for the funding by Tetfund. “I am happy to announce to you that the University is already enjoying support from Tetfund.”

The erudite Professor of Chemistry hinted that the Departmental Building funded by Tetfund has been completed and occupied, adding that the second one is nearing completion.

“The Governor’s continued assistance in ensuring that the University benefits from Tetfund funding is highly appreciated,” he said.

The Council Chairman equally seized the opportunity to specially appreciate the former first lady, Dr. (Mrs) Olufunke Agagu and the Agagu family for the 30 million Naira donation that facilitated the timely completion of VC’s Lodge and four (4) Units of Principal Officers’ Quarters.

Prof. Adesomoju explained earlier that the VC’s Lodge and the Principal Officers’ Quarters required a minimum of One Hundred and Twenty Million Naira to complete and that the Governing Council was only able to raise Ninety-Million Naira from the University IGR, and that with the Agagu Family’s donation, the needed amount was realised and the projects duly completed, he submitted.