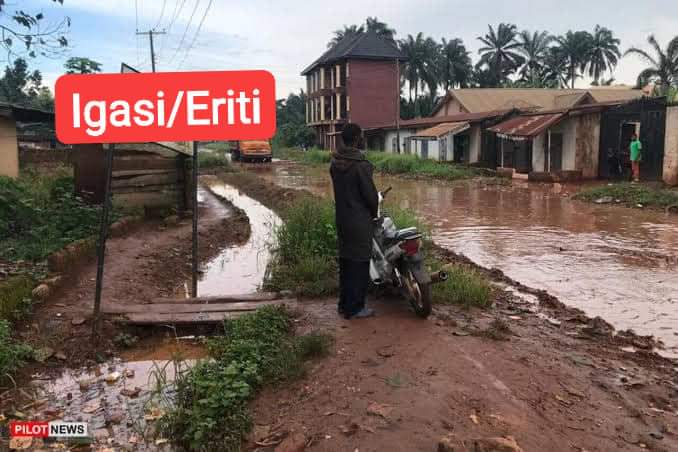 The abandonment of a road project embarked upon by the Niger Delta Development Commission about four years ago linking Ajowa Akoko with Igasi, Eriti to Omuo Oke in Ekiti state has brought a lot of economic setbacks to the area as markets in Igasi and Eriti are now sparsely patronized by people.

The monarchs of the two communities, the Eleriti of Eriti, Oba Amos Ogunleye and the Regent of Igashi, Princess Mojirade Ipinlaye in a separate interview with our correspondent, described the deplorable condition of the big portion of the road abandoned by the contractor as constituting security threat.

They said kidnappers and armed occasionally used the opportunity of the pothole to perpetrate their dastardly acts.

The road according to them started from Ajowa and it has not got to halfway before the contractor left, adding that all efforts to draw the attention of NDDC to the project had proved abortive.

They noted that as rain season is approaching efforts should be made to ameliorate the situation so that the people of Igashi and Eriti will not be totally cut off.

Presently only commercial motorcycles known as Okada are plying the road carrying two or three passengers and charging exhorbitant fares.

In a chat with an Eriti Akoko community leader, Chief Jerome Oloruntoke also lamented the situation of Igasi to Okeagbe Akoko road which is the fastest route to their local government.

According to Oloruntoke residents of Igasi and Eriti always come to Okeagbe for official transactions in their council headquarters at Okeagbe via Omuo Ekiti, Oyin to Okeagbe a longer distance instead of Igasi to Okeagbe. They appealed to authority concerned not to forget Igashi and Eriti communities in the scheme of things now that 2023 general elections are approaching.

They also appealed to Hon. (Dr) Olubunmi Tunji Ojo representing the area in the lower chamber to assist them to have a motorable road.