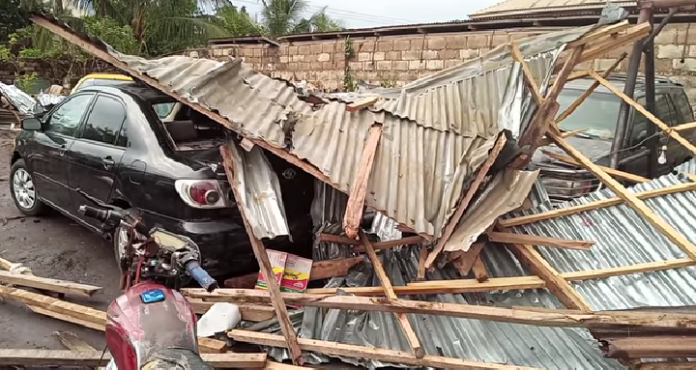 Residents living on Abiodun Aloba street off Ondo Road near infinity Hotel, Isinkan Akure have sent a save our soul message to Ondo State Government, National Emergency Management Agency NEMA and State Emergency Management too come to their aid as rain storm has destroyed their properties.

According to the residents the rain which started normal later turned heavy with wind blowing off roof tops and destroying anything on its paths.

Speaking to newsmen on the incident, Princess Olamide AJIJO whose husband car parked in their compound was destroyed by the storm that removed and blown the roof top of a nearby building described the situation as very pathetic.

According to her the husband just left the house for a meeting with landowners at Obaile to resolve solve issues surrounding the land we are erecting our property when the storm wrecked it’s havoc.

“In fact my husband had planned to go to the meeting with the car but couldn’t due to the lingering fuel scarcity”.

Speaking further on her experience, Princess Ajijo said everything happened in a jiffy. The storm came suddenly and I was trying to save my children from danger as the whole building was vibrating there was nothing I can do to move the car to safety only to came out when the storm subsided and found our only car in runs.

Princess Ajijo who appealed to the Ondo State Government and NEMA to urgently come to their aid the properties the storm removed that landed on their compound greatly damage my husband car as both the front and back glass screen and the widow glass on the top of the car were totally destroyed apart from the body.

In her own word “my husband is a civil servant and you all know how things are in ondo state now and Im full time house wife and jobless even though a Master Degree holder in accountancy. That car is the only one the family has and that we are using especially to take the children to and from school that has been destroyed by this natural disaster.

We really need help hence my appeal to our Talk and Do Governor Arakunrin Oluwarotimi Akeredolu SAN to come our aid in order to put our only car back on the road as quickly as possible because the hardship will be unbearable.

According to her medicine store has been the family only source of means of livelihood for more than ten years her husband lost her job. She called on the authorities to see what they can do to rescue them from this disaster.

The victims appealed to the both the Federal and the State Governments and other public spirited persons and institutions especially NEMA and SEMA to urgently come to their assistance.