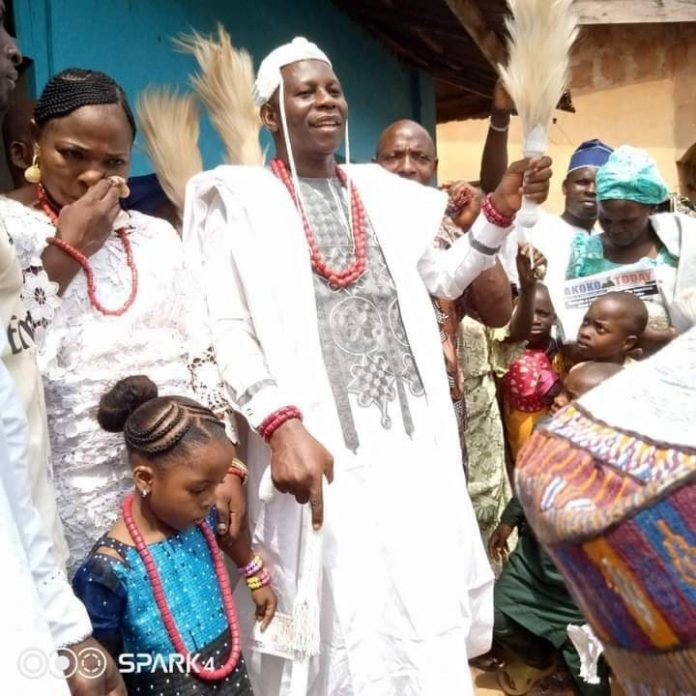 As part of communual efforts of Afin indigenes to make the new monarch of Afin Akoko in Akoko northwest local government area of Ondo state Oba Professor AbdulRaheem Mustapha Adejoro to be more effective and efficient in performance of his official royal duties diligently, a group of patriotic indigenes of the town known as Afin Galaxy forum has donated a new Toyota Car to the monarch.

Mr Abayomi Olukoju and Ojo Famujimi both President and Secretary of the forum were on hand to present the gift .

They noted that almost 15 years of interregnum of the stool of Alafin of Afin has made the town to be stagnant in terms of developmental project and infrastructure, saying that government alone can no longer shoulder the responsibilities.

They equally appealed to other well to do individual and groups to come to the aid of Afin Akoko.

In his response the monarch, Oba AbdulRaheem Mustapha Adejoro commended the group for being patriotic and selfless in giving back to the community.

He described the group as a pacesetter that others should emulate.

The traditional ruler, a Don reminded his people of the ongoing palace project, assistance to government schools and health center in the community.

He used the opportunity of the occasion to commend some indigenes who assisted in the renovation, and donation of drugs and other consumable items to the basic health center in Afin Akoko.

He called on others to emulate the spirit of self help effort to improve the condition of the town.

The traditional ruler however commended the NDDC for making Okeagbe-Afin road motorable, urging his subjects to be law abiding and always ready to fulfill their civic responsibilities to their government.