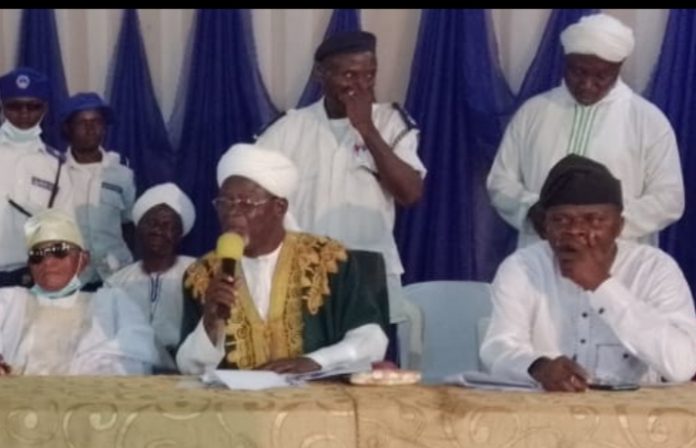 The need for unity among Muslims ahead of next year’s election formed the basis of submission of speakers at the annual Ramadan Lecture organised by Muslim Media Practitioners of Nigeria, MMPN, Oyo State Chapter.

The guest lecturer and Founder, Shafaudeen in Islam, Professor Sabit Olagoke at the programme held at NUJ Hall, BCOS, Ibadan harped on the importance of Muslims to be united ahead of the election while at the same time be active in other electoral processes.

Speaking on the topic “2023 General Elections and the Role of Muslims” Professor Olagoke emphasized on the need for Muslims to be change agents and at the same time called for moral training so as to overcome poverty, which he described as the instrument being used by politicians to deceive the masses during election.

In a goodwill message, the Arole Iba Oluyole of Ibadanland, Alhaji Nureni Akanbi also called for the election of right leaders who are ready to work and will address the myriads of challenges confronting the country.
In a welcome address, Chairman, MMPN, Oyo state Chapter, Alhaji Ridwan Fasasi said Muslims have the strength, number and wherewithal to determine the directions of next year’s election but the missing link is unity among the adherents.

“No doubt, Muslims generally are a major stakeholder in Nigerian project and their duties to ensure good governance are enormous while keeping silence is inimical and dangerous in all ramifications. It’s hightime therefore that Muslims were united. With unity, we will rewrite the history.”
“In fact, there have been politicking and politricking even championed by a prominent religious denomination ahead of 2023 election whereas it’s only Allah that has the sovereignty of installing a leader in line with Quran 3 Vs 26.”

“The incident is enough as an impetus to catalyse the Muslims who have the gold but that has been painted as a dummy to spur into actions and prepare adequately for the election to ensure fairness as no Muslim from the southern part of the country has occupied number one position even the number two position in Nigeria since Independence”.

The MMPN Chairman challenged Islamic religious leaders against giving titles to individuals with questionable characters as this has been counter-productive.

“Let me also charge us that the way and manner in which especially the league of Imams and Alfas in Yorubaland award Islamic chieftaincy titles to people of questionable characters need to be redressed. Our Baba Imams need to be enlightened on the implications of dashing out religious chieftaincy titles either at will or to highest bidders. This must stop.There must be moral criteria to be met before one can become an Amir of this or Amirah of that or Baba Adinni of something”.

“At the same time, the bloggers who hide under the cloak of laxity of an individual or his/ her moral deficiencies to disparage Islam are warned to desist from such to avoid the wrath of Allah”.

Former Chief Press Secretary to late Governor Lam Adesina, Alhaji Kehinde Olaosebikan
emphasized that
Muslims must play active roles in mobilizing and sensitizing others for all the electoral activities including Collections of Permanent Voters cards, PVCs, joining political Parties and ensuring the support of their own people.

Oyo State Commissioner for Information, Culture and Tourism Dr. Wasiu Olatunbosun who was represented by Director of Research and Documentation in the Ministry, Alhaji Abdulfatai Oyedeji re-echoed the need for Muslims to be active participants in all electoral processes.