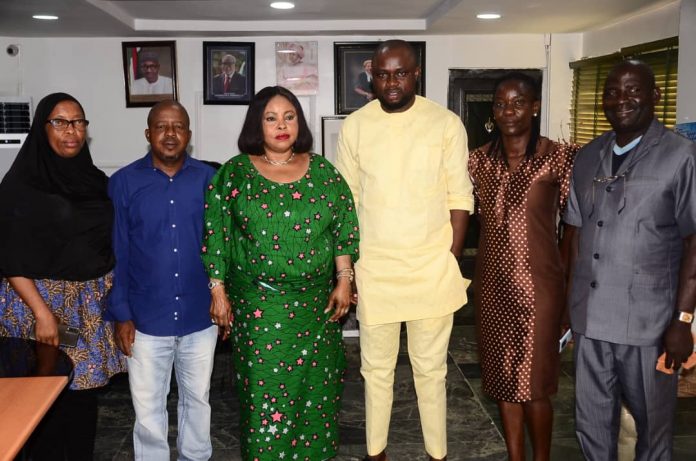 The Secretary to Ondo State Government, Princess Oladunni Odu has charged professional journalists and bloggers to engage more in investigative reports that will stem the tide of fake news.

She said this is important in the interest of the society.

Mrs Odu gave the charge in Akure while receiving the new Executives of the Nigerian Union of Journalists (NUJ), Ondo State Council, led by the chairman, Comrade Leke Adegbite who paid her a courtesy visit in her office on Thursday, 21st April, 2022

According to Princess Odu, media professionals as the conscience of the society, must not allow quacks or unprofessional bloggers to destroy the noble profession of journalism.

The first Ondo Female SSG, who was speaking against the backdrop of a fake online reports of death rumour of Governor Oluwarotimi Akeredolu, urged NUJ and other media professional bodies to sanction unethical practices for a virile society.

Princess Odu said it was unethical for some bloggers based outside the country to fabricate fake news of death rumour on the governor, noting that it was wicked to wish human being like them dead.

The SSG who expressed joy that Arakunrin Akeredolu who went for a vacation abroad, said he would be back in the state soon after his official leave.

Princess Odu said, “When your report is genuine, it gives a lot of honour”, she added just as she reeled out some of the achievements of the present administration saying the Governor is particularly interested in the welfare of the citizenry and workers.

While also using the opportunity to congratulate the new state executives, Princess Odu said as a friend of NUJ and the media, her doors are always open to the members of the union.

The SSG commended journalists in Ondo State and NUJ for imbibe professionalism over the years, urging them to sustain same.

Earlier, the New Ondo State Chairman of the NUJ, Comrade Leke Adegbite, who had commended core professionalism among journalists in the state, promised that the Union would continue to fight quackery in the profession.

The NUJ Chairman also condemned the fake news on the Governor, expressed joy that such wicked rumour did not emanate from professional journalists and bloggers in the state.

Comrade Adegbite encouraged the state government to continue to give top priority to welfare of workers.

Members of the newly inaugurated state Executive of the Nigeria Union of Journalists (NUJ) on Wednesday, 20th April, 2022 visited the Ondo State Internal Revenue Service (ODIRS) on a courtesy call where they were received by the management staffs on behalf of the Executive Chairman, Mr. Tolu Adegbie.

The NUJ State Chairman, Prince Leke Adegbite while noting that the visit is a clear indication of the respect the union has for ODIRS, said as journalists, members of the union cannot look away from the good work done by the agency in the state under the headship of Mr Tolu Adegbie.

“If someone or an agency is doing great, we should be the one to applaud them and likewise, if caught in the web of evil, we also do our best to bring such to public ridicule. We have come to encourage you to sustain great innovations initiated by Mr Tolu Adegbie to improve performance of ODIRS.

“We also commend your agency in the area of community development services being rendered by ODIRS”, he added saying just as he highlighted recent launch of some initiatives to improve revenue base of the state.

Prince Adegbite who also used the opportunity to charge the agency to render some of the messages in local languages for easy understanding further commended the management for staying above scandals.

In his response, the Chairman of ODIRS, Mr Tolu Adegbie who is on leave was represented by a Director at the agency, Mr. Olusegun Enikuomehin while congratulating the new state executives, said the roles of journalists cannot be over emphasized just as he called for continued synergy between the agency and the union.

Mr. Enikuomehin flanked by other top management staff of ODIRS, also used the opportunity to note that the agency had embarked on numerous restructuring efforts through deployment of technology, improved staff welfare, physical infrastructure among others just as he assured the union of readiness to provide supports where necessary.