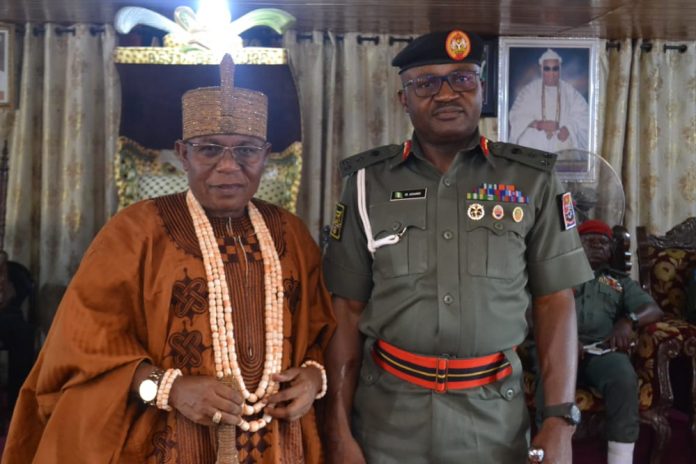 His Imperial Majesty, Oba (Dr) Aladetoyinbo Ogunlade Aladelusi Odundu II, Deji and paramount ruler of Akure Kingdom who is also the Chairman, Ondo State Council of Traditional Rulers, has expressed his appreciation to the Nigerian Army’s (NA) for her support to the Nation particularly Akure kingdom.

The Oba gave the accolades when the Commander 32 Artillery Brigade Nigerian Army, Brigadier General Mukhtar Adamu paid him a courtesy visit at his palace in Akure. The Monarch pledged to continue to support the Military in achieving its operational mandate in the state.

He also reassured the Commander that his kingdom will continue to work harmoniously with the NA for the peace and security of Akure.

In his response, Brigadier General Mukhtar Adamu stated that, on his assumption of duty as the 10th Brigade Commander who is in charge of security in both Ondo and Ekiti States, has deemed it necessary to pay homage and solicit for the support and blessings of the Royal father.

He added that the Nigerian Army also requires the cooperation of traditional institutions as contained in the Chief of Army Staff (COAS) vision which is to have “a Professional Nigerian Army ready to Accomplish Assigned Mission within a Joint Environment in Defence of Nigeria”.

He noted that the key term there is the “Joint Environment” which is not limited to other security agencies but traditional institutions as well. He averred that the citizenry are valuable for meaningful and sustainable operational success.