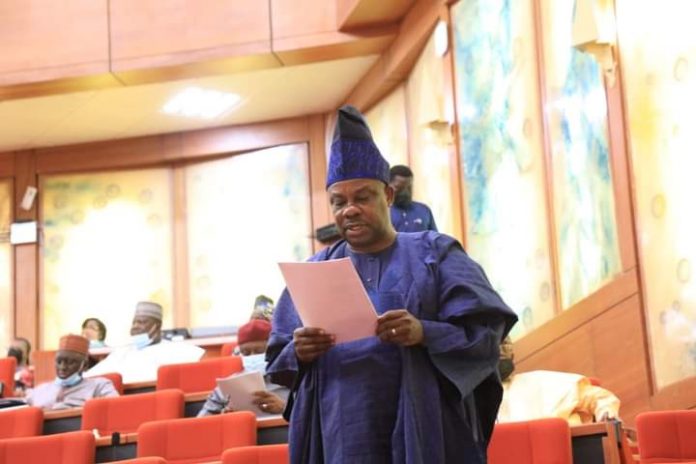 The event in the couple of days in Nigeria where over 50 Nigerians from the 18 registered political parties have shown interest in the number one seat, the President and Commander- In-Chief of the Armed Forces of Nigeria, will soon determine the future of the country.

Roger Smith said ” You don’t just stumble into the future; you create your own future”. Of all the declarants and Presidential aspirants across all the parties, who among them can we say has genuine plans to create future and hope for Nigerians against the backdrop of myriads of challenges facing the nation.

I took my time to follow up majority of the aspirants and their reasons for wanting to contest, permit me to say that the formal public declaration of former Ogun state Governor, 2011 to 2019, and a Senator representing the Ogun central in the Senate on the platform of APC, Señ. Ibikunle Amosun stands out.

Others have been promising to fix Nigeria, some promises hope, some promises unity, some promises better life and so on, but stakeholders across the divide testified on Thursday May 5, when Senator Amosun declared before the mammoth crowd at Shehu Musa Yar’adua Centre, Abuja that we need a trail blazer and someone whose Nigeria is safe in his hands like Ibikunle Amosun.

Senate Leader Abdullahi Yahaya said Ibikunle Amosun is ” exceptionally good, a person of courage and generousity and Nigeria will be safe in his hands”

Corroborating this, Dr Kayode Fayemi, a co-presidential aspirant, said Amosun is a complete Nigerian having similarity in ideological orientation like him, hence his decision to attend his declaration.
“You can be sure that between us, whichever way, we will be in the tent and not outside the tent” , Fayemi assured supporters.

In his declaration speech, the man of the moment, Senator Ibikunle Amosun, flanked by his adorable and beautiful wife , Olufunsho , who definitely would be a worthy, compassionate and diligent First Lady, recalled series of his political roles in the national development when he was in the Senate between 2003 to 2007 and as Governor of Ogun State from 2011 to 2019 and back in the Senate 2019 till date as a call to duty and service to energise his faith in Nigeria.

” I am convinced about my capacity in leading the country to national glory. I offer myself to serve as national revival and rejuvenation in providing comprehensive audit of security architecture and accelerate economic growth in the country.”, he said.

He promised to consolidate on the achievements of President Muhammadu Buhari in the area of security.

“To do this, I will prioritise human security as the fundamental principle and ultimate goal of national security.

“Putting human security at the forefront and as the direct principle of state policy, would imply that the two dominant goals of my leadership would be national security and economic development,” he said.

He added that he had spent the past few months talking to professionals on the security challenges in Nigeria and how they could be better managed.

I quite agree with Senator Ibikunle Amosun in his priority of human security and accelerated economic growth and development as a way out of the doldrums we are in the country.

Going by the overwhelming felicitations and support received by Sen. Amosun across the divide as well as full representation from the Alake of Egbaland, Oba Adedotun Gbadebo, former President Olusegun Obasanjo, former Oyo state Governor, Sen. Rasheed Ladoja, Amb. Sarafa Tunji Ishola, Nigeria High Commissioner to UK, who was physically present as well as federal lawmakers, youths and women groups in the country as well as religious leaders, the signs are clear that Nigerians dreams and potentials will be maximally realized with a President like Senator Ibikunle Amosun .

Kemi Muritala, a public affairs analyst, contributes this piece from Abuja and can be reached on kemimuritala@yahoo.com
07035858764