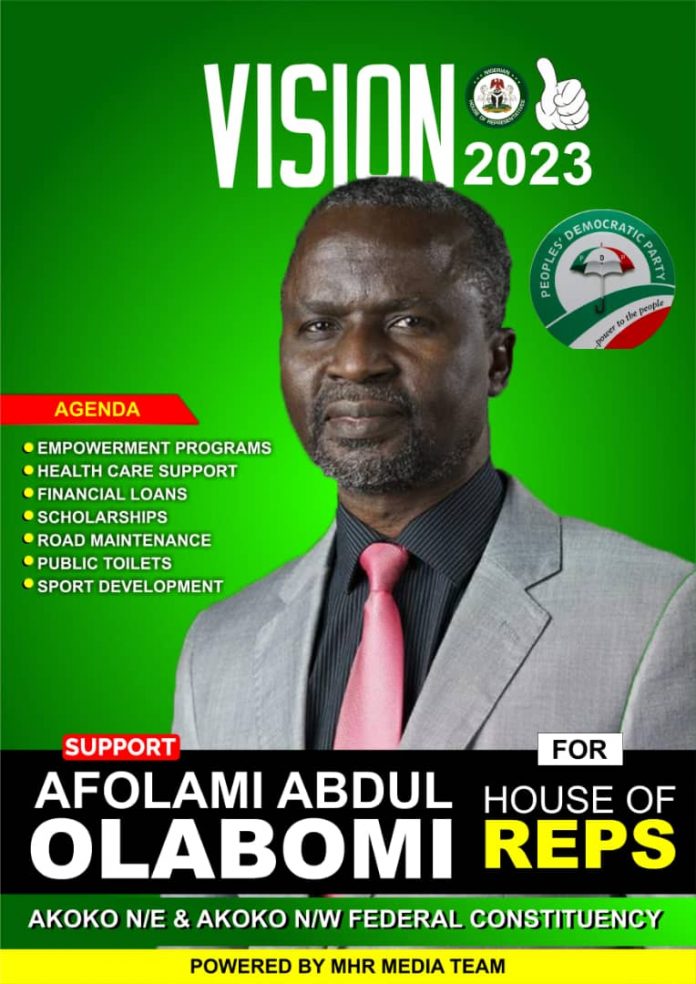 The bid to retrieve power from the incumbent All Progressives Congress (APC) lawmaker in Akoko North East/West federal Constituency of Ondo State at the National Assembly Abuja, formed the agenda of the latest visit of an aspirant under the Peoples Democratic Party (PDP), Mr Afolami Olabomi to leaders and executives of the party.

Olabomi has been on a visitation tour to Akoko North West Local Government Area, where he met with critical leadership and elders of the PDP.

He expressed his gratitude and appreciation while addressing the leaders for their continuous trust and loyalty to the Peoples Democratic Party (PDP).

Olabomi re-emphasied his commitment to redeem the image of People’s Democratic Party (PDP) from the state of an opposition, to a party in power that will win the general elections in 2023 across his federal Constituency in Akoko North East/West federal Constituency of Ondo State.

He said if given the due support and votes of all majorities in the primary elections slated to hold later in May, this would be achievable.

Olabomi lamented the state of drop outs of students at the tertiary institutions across Ondo State and the incessant gross insecurity challenges encountered across Akoko North East/West federal Constituency boundaries.

In his appeal to the elders and leaders of the Peoples Democratic Party (PDP) in Akoko North West local government area of Ondo State, he noted the absence of scholarship and support for students from the office of the incumbent Member of the House of Representatives under the All Progressives Congress (APC), which he believed will help rescue and reduce the situation of continuous drop outs of students in tertiary institutions, as a result of hike and gross inflation in tuition in Ondo State.

He further highlight measures to which bursary will be made available to students across all departments of university if elected into office in 2023 to represent Akoko North East/West federal Constituency as their House of Representatives Member at the National Assembly, Abuja.

Olabomi equally lamented the failure of government to curb continuous increase in the rate of kidnappings and insecurity of lives and Properties across Akoko North East/West federal Constituency border areas of Ondo State.

He expressed disappointment in the activities of the present incumbent Legislator under the All Progressives Congress (APC) stating that more can be done to better the lots of security and future of our children across the Akoko North.

They thereafter passed a Vote of Confidence on Afolami Olabomi to represent the People’s Democratic Party (PDP) and assured him of support ahead of the primaries and to the general elections, adding that a man of Afolami Olabomi with a versatile experience and financial impetus is what the PDP needs at this present day of the country to rescue and redeem power from the APC in the 2023 general elections.

Olabomi in his reaction, appraised the dispositions of the leaders and executives of the Party and thank the PDP for giving him a warm welcome and a level plain ground to contest.

He re-empasized his commitment toward the party and hails the spirit of everyone ready to salvage power from the incumbent All Progressives Congress (APC).