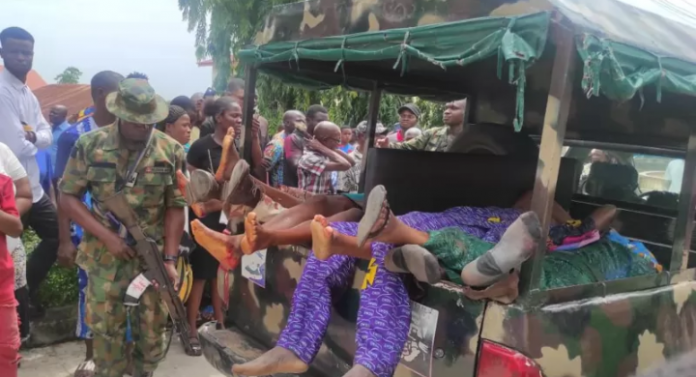 As at the time of the attack on the Catholic Church in Owo, the perpetrators launched an explosive in the vicinity of the church before moving to shoot at close range inside the church. It is a clear intention to scare people (away).

The Catholic Church is close to the Palace of the paramount ruler of Owo Kingdom.

The eyewitnesses were those who raised the alarm and other residents who obviously running for safety while putting out the information simultaneously.

My colleague Damilola Olufemi was running-tweeting at the same time when the incident happened.

The incident which happened around 12 noon Sunday 5th June saw dozens of worshippers left dead in the church including children.

The media reported ‘Explosion’ then, but it is over 4hrs now and pictures with videos had shown the close range gunshots.

It is a DEVELOPING STORY. However, it should have now be noted that it was a Mass Killing where explosive was used to scare people away at first.

It was the information at that time that media organizations were privy to; now there are several updates and confirmed reports.

As the time of writing this, the Ondo State Police Commissioner said they have deployed Anti Bomb Squad to the scene of the incident.

Ikulajolu Oloye Adesola is a journalist from Ondo State.