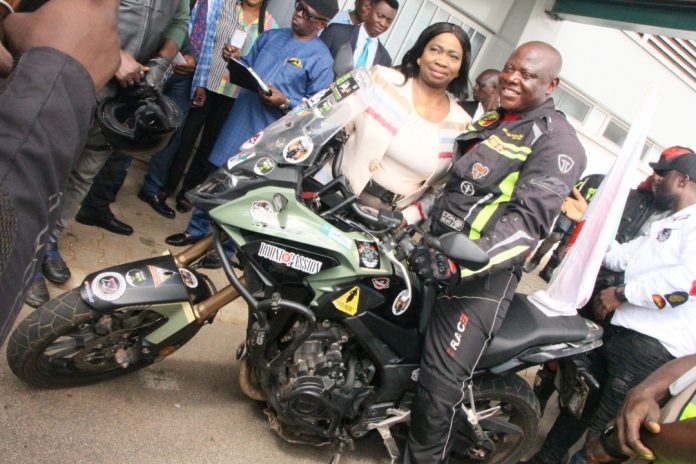 David Kunle Adeyanju, Nigerian man who traveled from London to Lagos by bike on Thursday met Hon. (Dr) Abike Dabiri-Erewa, Chairman/CEO Nigerians in Diaspora Commission (NiDCOM) as well as Management and Staff of Nidcom, as he successfully arrived in Abuja after his London To Lagos Bike Challenge.

Hon. Abike, commended him for achieving such a daring feat and using the opportunity to create awareness for the worldwide “End Polio Now” Project. In her words, “ We are here to support you in your charitable activities, If other Nigerians in the Diaspora key into this, Nigeria will be a better place”.

She also commended him for projecting Nigeria’s image positively through the tour.

Mr. Adeyanju stated that, he was a young boy when he had his first experience with Polio. His Classmate and friend in primary school had the disease.

He was aware of everything his friend went through before his eventual passing and vowed to devote his time to ensuring he spurs every individual to keep the polio number at point zero.

Mr. Adeyanju plans to use the challenge to raise awareness as well as funds to end Polio all over the world. He added that all the money he gathered will go in the direction of primary healthcare, the Polio Plus Project, water, and sanitation.

He stressed that he had stared death in the face on four occasions on his 41-day journey and that the entire experience stretched him to his limits, but he remembered he is a Nigerian and kept going.

His 12,000km trip started in London and took him to France and Spain. From there, he crossed into Morocco and went to Casablanca. Before arriving in Lagos, he stopped at Mauritania, St. Louis, Dakar, Mali, Bamako, Burkina Faso, Cote d’Ivoire, Accra, Lome, and Benin Republic.

Kunle Adeyanju expressed so much excitement and declared that, after his successful journey from London to Lagos, his next big adventure in two years time, is to ride from Lagos to Israel and Israel to Tibet.