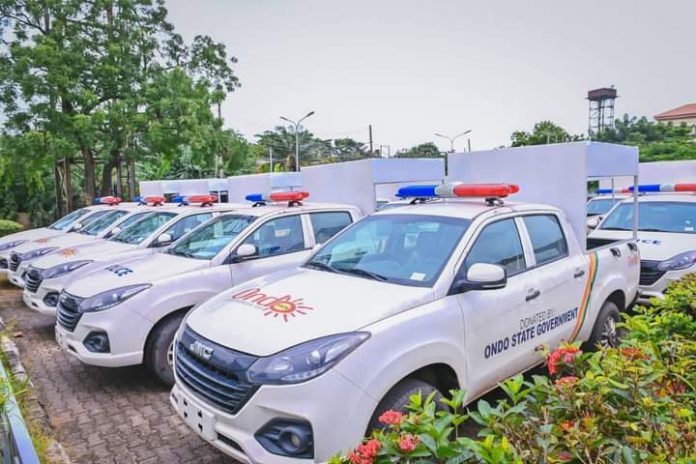 The Nigeria Labour Congress (NLC), Ondo State Council, has applauded Governor Oluwarotimi Akeredolu, for improving security architecture through the donation of 50 fitted vehicles by the State Government to security agencies in the State.

The Governor had last week, handed-over the fitted Patrol Vehicles to heads of the Security Agencies in the State including the Nigerian Army; Nigeria Police; Nigeria Security and Civil Defence Corps; Department of State Services and the Amotekun Corps.

However, the union described Akeredolu’s unrelenting stance on security as a giant leap aimed at strengthening the security system of the State.

NLC said this on Wednesday, in a statement signed by the State Chairman and the Secretary, Comr. Adeleye Sunday and Comr. Shado Omokehinde, respectively.

The statement partly read, “Dear Governor, it is noteworthy to say, since the introduction of the Amotekun Corps into our dear State, more peace, tranquillity and less trepidation among us has been achieved with commendations from within and outside the country for Your Excellency”

“It is in appreciation of this laudable effort of yours that the Ondo State Workers represented by the leadership of Organised Labour in the month of March donated 30 units of Motorcycle to the Amotekun Corps through your Special Adviser on Security who is equally the Commandant of the Corp.  The gesture was not only a support to your government efforts at securing lives and properties but to also convince you that, we are partners in the Ondo project especially on security of every citizen of the State”

“Your Excellency, we pray that as these equipments are being judiciously deployed and put to good use, our State shall become more peaceful and a forbidden place or hideout for criminal elements who may want to trouble our peace and kill mindlessly innocent men, women, youth and children.  We pray that, the unfortunate incidence of Owo never happen again in our dear land. Amen”

NLC, however, prevailed on well-meaning residents to join hands with the government to outrightly combat crimes and all criminal activities in state, while it urged the security agencies to put the vehicles to good use.