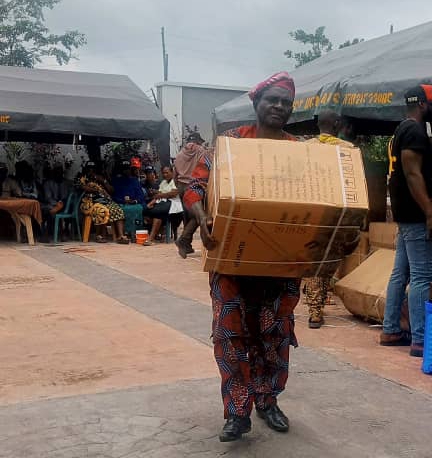 As part of efforts in promoting agricultural development in Akoko land, the lawmaker representing Akoko North East/North West federal constituency in the lower chambers, Olubunmi Tunji-Ojo, has distributed agricultural tools, Chemicals and Seedlings to farmers in the area.

Not fewer than 238 farmers from various towns in the area smiled home with quality BTO agricultural tools, Chemical and Seedlings including cash gifts.

Mother to the legislator, Mrs Olayinka Tunji-Ojo, while presenting the items in Okeagbe Akoko said the distribution was to encourage the farmers in modern day farming to boost their productivity.

In his words “I urge you beneficiaries to make judicious use of the equipment. This is being done to promote Agriculture in our constituency to boost economic growth.”

This gesture is coming a fews days after the lawmaker launched the BTO N50 million scholarship scheme for 1000 indigent students, who are indigenes of the Federal constituency.

Tunji-Ojo who has before now equipped security formation in the area for adequate protection also pledged to continually intensify moves to protect farmers and secure lives and property.

According to him, “Akoko will be safe and our farmers will farm with peace of mind in their farmlands.”

One of the beneficiaries, Adeyeye Sherifat said, “the corn thresher I was given would reduce the normal time I ought to use while planting and this will bring more improvement in my farmland.”

Abdulrazak Yayah who was given food dehydrator said it would preserve his farm produce as they are perishable food.

The distribution is envisioned to boost agriculture and ease the stress of farmers in Akoko North East and West to make their farmland fruitful.