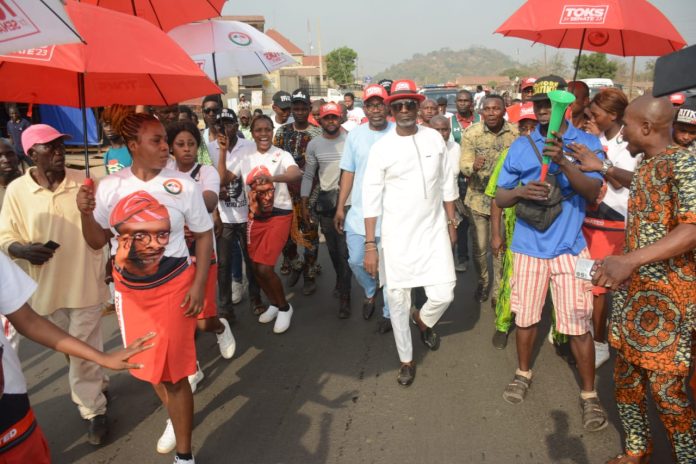 The rank of the Peoples Democratic Party in Ondo North Senatorial District swells up as the candidate of the Peoples Democratic Party, PDP in the Northern Senatorial District, Akogun Adetokunbo Modupe, with others leaders of the party stormed Ikare-Akoko to receive former House of Representatives member representing Akoko North East and North West between 2015-2019, Hon Friday Olemija back to the party.

Hon. Olemija, also a former 3-term Chairman of Akoko North East Local Government said his defection back to the PDP was an home coming.

He said “I thank the leaders of the party, PDP for the warm reception. For three months, they came asking me to join them. I acceded because my former party lacks adequate coordination”.

He therefore acknowledged that his defection wouldn’t have been possible, but for the persistence of Akogun Adetokunbo Modupe for over three months asking him to come back to the party.

In his speech, Akogun Adetokunbo Modupe thanked Hon Stephen Olemija for rejoining the party with his followers in the local government.

He said, “this is homecoming for you and your group because PDP is your home as a founding member of the party. Your coming will boost the party’s chances of returning to power in the local government, the Senatorial District, and the state at large”.

Other party leaders at the event to welcome the defectors were the National Publicity Secretary of the Party, Hon Debo Ologunagba, State Chairman of the party, Hon Fatai Adams, the Governorship Candidate of the party in the 2020 election, Chief Eyitayo Jegede SAN, Chairman of the State Presidential Campaign Council, Ambassador (Col.) Roland Omowa Rtd, the Caretaker Chairman of Ekiti State PDP, Arch Sodiq Obanoyen, former Chief Whip of the House of Assembly, Hon Tunji Dairo, immediate past Attorney General and Commissioner for Justice in Ondo State, Mr Kola Olawoye SAN and other leaders.