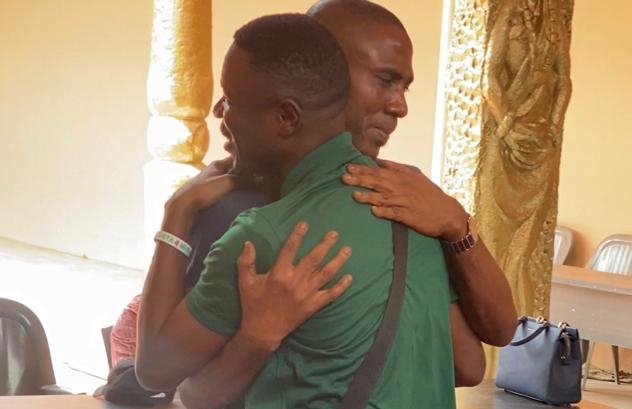 An end has finally come to the crisis rocking the ancient town of Idanre, Idanre Local Government Area Council of Ondo State as the two political gladiators in the town, have resolved to end their political acrimony which has thrown the Rocky City into confusion in the last two weeks.

In a meeting organised at the instance of the first class monarch in his palace, Oba Fredrick Aroloye, Owa of Idanre Kingdom on Tuesday insisted that the two prominent sons of the town should eschew violence and political differences, saying the unity and peace of the town are non-negotiable.

It could be recalled that this is not the first time the monarch has invited the parties into meeting to resolve the clashes between the supporters of Hon Festus Akingbaso and Hon Tajudeen Adefisoye.

Owa has earlier threatened to invoke ancestral curses on sponsors and perpetrators of political violence in Idanre but inspite of the appeal of the monarch, the crisis persisted as the supporters action continue to threaten the peace of the town.

The member representing Idanre/Ifedore Federal Constituency at the National Assembly, Hon Tajudeen Adefisoye has allegedly accused Hon Festus Akingbaso, candidate of the People’s Democratic party in the February 25 House of Representatives Election of masterminding assassination attempt on his life, a claim refuted by the House of Assembly member, saying Adefisoye cooked up the story with intentions of using the story to garner sympathy votes from the people of the federal constituency.

Owa noted that inspite of their political differences, they must learn to tolerate themselves, adding that tolerance and patriotism to the development of the federal constituency should be prioritized rather than creating division among the good people of his domain.

To prevent future occurrence of such crisis in his domain, the two leaders were made to sign peace accord with a promise to allow peace to reign in Idanre before, during and after the general elections.

The Monarch pleaded with Hon Festus Akingbaso to withdraw the law suit earlier instituted against Hon Tajudeen Adefisoye where the federal lawmaker was charged with defamation while appealing to the leaders to ensure peaceful conduct of their campaign ahead of the forthcoming election.

The monarch also ordered Hon Tajudeen Adefisoye to apologize to Hon Festus Akingbaso over the allegation of assassination attempt leveled against him which the Federal Lawmaker did at the present of everybody that attended the peace meeting.

The climax of the meeting was the warm embrace of the two brothers who promised the monarch of peaceful disposition during and after the polls.

Speaking with the PATH, Hon Festus Akingbaso thanked the monarch and the political leaders in Idanre for their elderly intervention in the unwarranted crisis in the town, asking all political gladiators to call their supporter to order.

He stated further that, Small Alhaji is a brother that he will never wishes bad thing happen to inspite of their political differences.

In the same vein, while apologizing, Hon Tajudeen Adefisoye described Fessy West as elder brother that he will continue to adore.

In a telephone chat, the Former Chairman of Idanre Local Government and PDP Chieftain, Hon Taye Sunday commended the monarch for the peace accord meeting, asking the two leaders not to dissuade from the Peace Accord signed.

His words: ” Election will come and go; what become of the people you plan to represent? Let’s embrace peace and mobilise the electorates to vote for you, present your score cards and allow them to vote for the candidate of their choice in a free and fair election”.