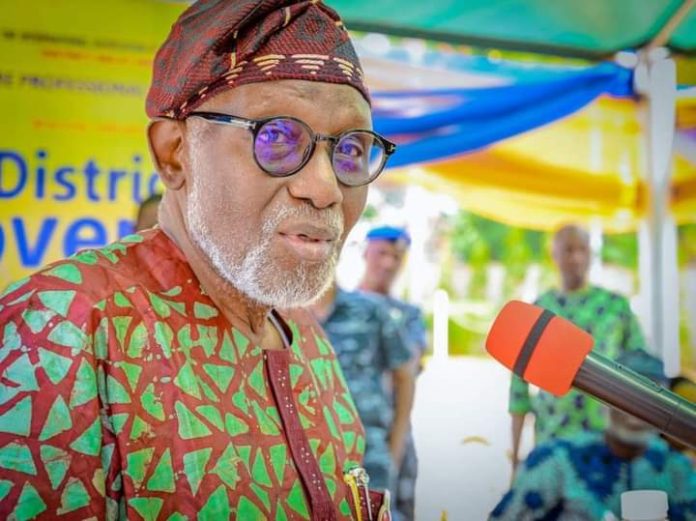 Governor of Ondo State, Oluwarotimi Akeredolu says he will continue to discharge his official duties to the good people of Ondo State in line with the REDEEMED Agenda of his administration, while he finds quality time to rest for renewed vigour and strength just like any man in his situation.

Akeredolu stated this on Tuesday following reports that his health had deteriorated.

The reports got people worried when they couldn’t see the Governor at weekend’s lay of wreath in commemoration of the 2023 Armed Forces Day Celebration. He was represented at the event by his Deputy, Lucky Aiyedatiwa.

Also, on Monday, a voice note of the First Lady of the State, Mrs Betty Anyanwu-Akeredolu went viral raising fears about the Governor’s health status.

It is against these knowledge, that the Governor finally spoke on his health status.

Speaking through Richard Olatunde, his Chief Press Secretary, Akeredolu admitted that just like anyone, he was ill and has been treated, adding that he’s recuperating well.

“We have observed the growing anxiety about the State of Health of the Ondo State Governor, Arakunrin Oluwarotimi Akeredolu, SAN, CON. The good people of the State and, by extension, other friends and well-wishers continued to express concern over the wellness of the Governor, especially since yesterday.

“We are constrained to respond to these concerns and assure our people that by the grace of God, there is no cause for alarm on the Governor’s state of health.

“Governor Akeredolu, just like every other mere mortals has had some health challenge for which he has since received treatment and recuperating speedily. Since the Governor is not a super human and the immunity his office enjoys does not extend to physical wellness or otherwise, the health issue is therefore not an unusual one.

“However, contrary to speculations and insinuations making the round, the Governor though frail, is discharging his official functions.

“Mr. Governor is not faced with any life-threatening illness that would have encouraged any alleged conspiracy in his administration. He, in fact, held Executive Council meeting with the Exco members till 4pm on Wednesday, 11th January, 2023 after the Security Council meeting where far reaching decisions were taken on the escalated clashes in Ikare-Akoko.

“On January 7, 2023 Governor Akeredolu led his brother Governors in the Southwest and other party bigwigs to receive the Presidential Candidate of the All Progressives Congress (APC) in Akure for the State Presidential Campaign Rally. On January 8, 2023, he was at The Redeemed Christian Church of God, Jesus House Cathedral, Region 22 Headquarters, Oke-Ijebu, Akure for the Holy Service commemorating the 2023 Armed Forces Remembrance Day Celebration.

“For emphasis, the Governor, who participated in rigorous campaign activities on the 7th of January, couldn’t have been bedridden as widely speculated. Moreso, last Friday, Governor Akeredolu still inaugurated a new Refrigerated Van for the use of Meat Dealers in the State. He also received the Melvin Jones Award of the Lions Club International same day.

“While we appreciate the growing concerns about his wellbeing and indeed, appreciate the outpour of prayers even beyond partisan lines, we urge all persons of goodwill to ignore unfounded insinuations capable of creating any false sense of needless anxiety,” the statement read.