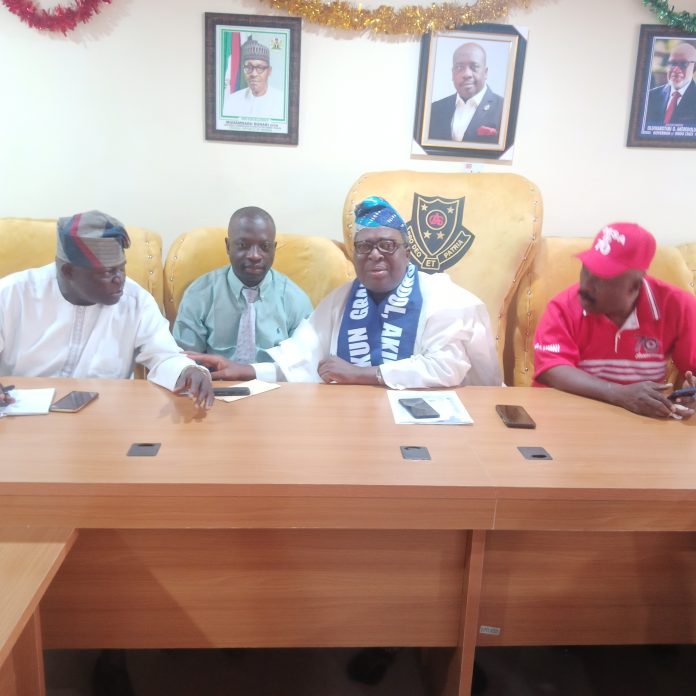 Oyemekun Grammar School, Akure (OGSA) Alumni Association, on Wednesday during a press briefing rolled out the itinerary for its 70th anniversary.

The Press briefing was held at the Alumni Secretariat building in the School.

Rolling out the itinerary, the National Vice President, High Chief Segun Ogunjobi, informed journalists that the activities marking the 70th anniversary will be a weeklong one.

According to him, all members of the National Executive Council (NEC) will arrive on Sunday, January 22, while the following day, Monday, January 23, will feature Compendium for the Anniversary or Documentary. There will also be road shows and payment of homage to the Deji of Akure, Oba Aladetoyinbo Aladelusi, who is an old student of OGSA.

There will be career talk and novelty match on Tuesday, January 24, while on Wednesday, January 25, commissioning of projects, anniversary lecture and cultural display will take the centre stage.

Thursday, January 26 will feature inter-house sports, as well as cocktail and interactive session.

On Friday, January 27, it will be the return of old rivalry as OGSA hosts Aquinas College, Akure in a friendly football and volleyball games. Earlier in the day, there will be Art and Science exhibitions.

The weeklong event will climax on Saturday, January 28, with the presentation of awards to staff and students, cutting of the anniversary cake and dinner. A thanksgiving service holds the following day, Sunday, January 29.

All the events hold at the school premises.

High Chief Ogunjobi who stood in for the National President, Dr. Niyi Ijogun at the Press briefing, also took time to clarify the purported return of OGSA to the Anglican Church.

Ogunjobi noted that, though the school is owned and financed by the government, it is in the process of handling back its ownership to stakeholders.

“Though we are not in the position to contest the ownership of Oyemekun Grammar School, but the fact is that the school is owned by the government.

“The school was founded on January 1953 and was taken over by the government in 1976, now the government has deemed it fit to hand over its ownership back to stakeholders and we are already on the process of doing this.

“Stakeholders here includes the community, the alumni and the PTA. As alumni, our major concern is not about who owns the school, all we are after is the progress and development of the school and if you look at what we are doing, it is towards the advancement of the school.

“We are trying to bridge the gap particularly on infrastructural development, this is the little we are doing to contribute our quota and if the government is saying they want to hand over the school, we will be much happy with this development and we are already in the process of doing this with several meetings.

Also speaking, the Central Planning Committee member in charge of infrastructure, Alhaji Idowu Yusuf Abidakun, disclosed that N55.6m have been spent so far on new infrastructure and face lifting of old buildings, adding that the projects at still on going.

“As part of the programs outlined for this anniversary, we shall be commissioning various projects built by this present administration.

“Some of which includes; the new principal’s administrative block, the volley ball court, the longest block opposite the admin block, the school canteen among others.

“Some if these projects are still under construction and it may not be easy to give the exact amount spent so far but in aggregate, we have spent N55.6million in all.

The School Principal, Mr Okeowo Ogunleye had earlier commended the old students for their investment in scholarship and infrastructural development.

Some of the old students at the Press briefing include, the National Publicity Secretary, Chief Ayo Ikulamberu; National Treasurer, Bunmi Adeparusi; former Permanent Secretary in the State, Mrs Kosemani Kolawole and Mr Johnson Mibiola, Vice Chairman of the State branch.

More pictures from the Press briefing: