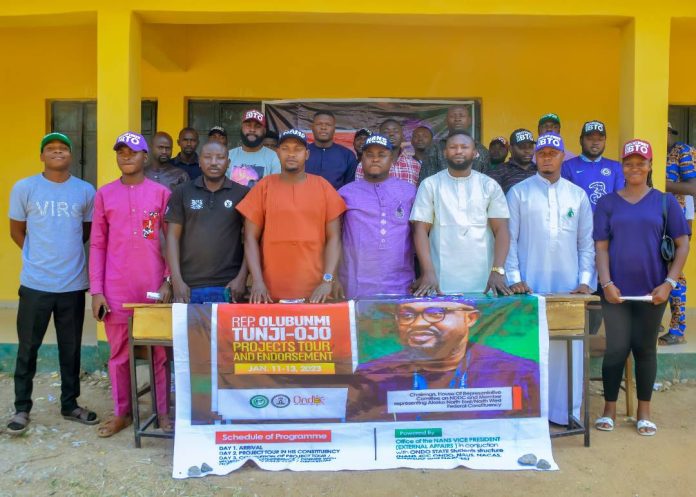 The re-election bid of the Chairman, House of Representatives Committee on the Niger Delta Development Commission, (NDDC), Hon. Olubunmi Tunji-Ojo, again received a boost as students from Ondo State endorsed him for second term.

The students disclosed this during a tour on some projects executed by the lawmaker within Akoko North East/Akoko North West Federal Constituency.

According to the jointly signed by the National Association of Nigerian Students (NANS) Vice President External, Akinteye Babatunde Afeez, the Joint Campus Committee, NAUS, NACAS, ANWSUA and NAANES Tunji-Ojo has not only represented his constituency very well but the entire state.

The statement read, “This is in line with his unparalleled achievements in his glorious first term as he has shown beyond benchmark that he possesses the leadership qualities needed for the transformation and development of Akoko North East/Akoko North West Federal Constituency.

“It is in line with the information above that the entire Students’ Structure in the state comprising of the office of the NANS Vice President (External Affairs), NANS JCC Ondo State axis, NAUS, NACAS, ANWSUA and NAANES have come together to publicly endorse Hon Olubunmi Tunji-Ojo (BTO) for another term in office.

“His vibrancy and versatility in the green chamber has earned him the position of the Chairman, House Committee on the Niger Delta Development Commission (NDDC) despite being a first timer. His love for students and youth is unprecedented. This is why his youth-based programs for over three years since he assumed office have been exceptional.

“Recently, he gave scholarship to fatherless undergraduates from Ajowa, and he remains committed to the payment of school fees of indigent students till date. For those yet to be admitted into any institution of higher learning, the quintessential lawmaker has so far purchased and distributed more than 2000 JAMB forms and enrolled hundreds of students in computer training.

“Recently , also approved 50 million Bursary to students in his constituency, the largest of its type in Ondo state by any House of Representatives member. Also, about 6000 youths have been empowered with skills to become their own bosses, while a new skill acquisition centre has been approved for Ogbagi Akoko.

“All secondary school students in his constituency are not left out as they enjoy reasonable and appreciable gifts and awards as they participate in the annual Mathematics Quiz Competition organized and sponsored by the lawmaker.

“Apart from these, BTO has touched the lives of his constituents in the areas of road construction, provision of modern health care facilities, construction of classrooms for schools, provision of agricultural tools,building of Skill acquisition in Arigidi Akoko, Chemical, seedlings and cash to farmers, provision of clean pipe borne water amongst others.

“In light of these facts, the entire Students’ Structure of Ondo State have hereby come together to organize a three-day PROJECTS TOUR and ENDORSEMENT PROGRAM for BTO in order to celebrate his outstanding leadership disposition, his laudable achievements and to solicit for support from all and sundry for the actualization of his second term bid.

“Ondo State Students collectively say that BTO is our first choice and our only choice. BTO is our choice of effective and robust representation at the Green Chamber. One Good Term of BTO deserves another.”