Precision
Home Opinion One Year After, A Tribute To Adegbaye Adebumiti (1951 – 2022) 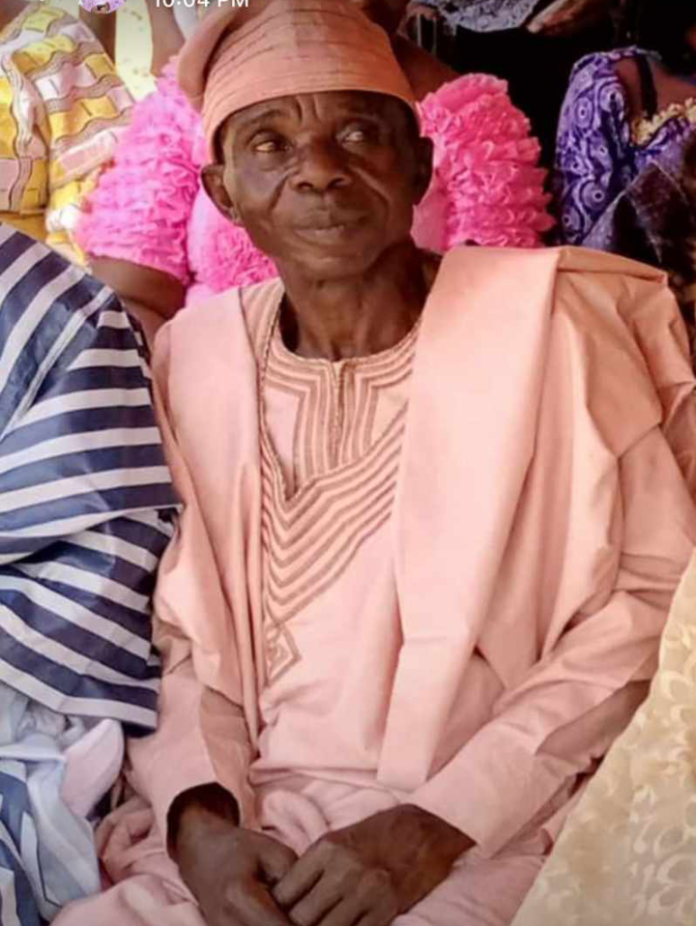 “Eni Omo sin lo bimo – He who has been buried by a child is the one who we can indeed say gave birth to a child.”

This yoruba maxim above, pardon my loose translation, will eternally be a source of my joy and that of my siblings over the demise of my late father, the heir apparent of the Adebumiti Olawani family in Odo Oja quarters, Ijare in Ifedore Local Government Area of Ondo State, who died on Wednesday January 5, 2022.

I was with him throughout the weekend leading to the week that ushered in the 5th of January, 2022, as we prepared to visit the Obafemi Awolowo University Teaching Hospital (OAUTH) in Ile-Ife, where we have been referred to from the Federal Medical Centre (FMC), Owo, for his treatment. In fact, I left his house in Akure for my place on Tuesday to see my wife and children with the hope that I will return on the next day, Wednesday ahead of our visit to Ife on Thursday. We had planned to leave for Ife as early as possible as all arrangements had been perfected. The last time I visited Ife with him, alongside my elder brother, Seun Jamiu on an appointment, we left home as early as 5am and we had to observe our Fajr (Muslims’ first prayer) on the way. So I was psychologically prepared for the journey.

Then came the D-day. Wednesday, 5th January, 2022, I was very much alive at home resting with the intention to leave for Akure after 4pm when the call came in from the wife of Adebola Idris – my eldest brother, who told me to start coming to Akure, that my Dad is dead. Prior to the news, I have been informed about his non responsiveness to eating by his wife, my mother, earlier that day. Then I had to contact a family nurse who lives very close to them at Ijoka in Akure. She would later confirm to me on phone that he had given up the ghost.

Out of anxiety, I rushed to the toilet to take a relief and quickly informed my wife about the development. I took the little items I can with me and performed my ablution – it was time for the Muslim prayer observed around 4pm. After performing the prayers, I set out for Akure on what will be a memorable event in my life. In my 36 years of living, I haven’t had the course to witness the death of anyone in my immediate family. So, that it was the head of the family himself who died at 70 years, 4 months, it was indeed memorable.

On getting to Akure, I dropped at the old Esso filing station to inform Abu Habibat – a vulcanizer opposite the station, though young, he was a close confidant of my late father. I took a taxi heading to Ijoka from there and the reality dawned on me when I met the nurse at the T-junction leading to our family house. She confirmed to me the obvious. On getting home, sympathizers had already thronged our residence. I was greeted by the Imam of Ijoka community, Sheikh Abdulazeez AbdulQadri. I was about heading to his room, when I was told my late Dad is at the back of the building. The scholars who were around had started the final ritual on him. He’s being cleansed up in line with Islamic injunction. When I saw him, I could only gave a sigh of relief, knowing fully well the rigours he had passed through during the course of his sickness. He was to start treatment at OAUTH on Thursday, 6th January, 2022 when he died on Wednesday, 5th January, 2022. Apparently, Allaah does not want him to go through the pains that will come with the treatment. He was to start his chemotherapy.

Born in September, 1951, to the family of late Pa Adebumiti Olawani and Madam Adeola Adebumiti of Odo Oja quarters in Ijare, my father, Mr Adegbaye Adebumiti, attended Ondo Boys High School, Ondo town. He later attended a Printing Training School in Ibadan and Cooperative College in Akure. He worked as a Banker at the defunct National Bank in Ibadan and also in the Ondo State Civil Service, Akure. He retired from the Ondo State Service as a Higher Superintendent Printing Officer (HSP) in 1984. He spent most of life in the private sector after leaving the public service. He got married to his great supporter, my mother, Iyabo in Ibadan in the early 80s. Though my late father is without University education, all his children had University education. His support for education is without doubt. Even his grammatical construction laced with good handwriting speaks volumes.

My late Dad was a social activist, at least in his own world. He was actively involved in the formation of many social groups within Akure and Ijare his hometown. Chief of such social groups is the Elewe-Obi Club 21 and the Nigerian Union of Pensioners (NUP). He was the Secretary of most social groups he belonged and would document every activity of the groups skillfully. Apparently, his knowledge from the Cooperative College put him in good stead to achieving such feats. While as Secretary of the NUP in Ifedore Local Government Area of Ondo State, he was instrumental to a lot of reforms and assisting the Chairman, Pa Jacob Afun. He would told me his efforts at ensuring that the NUP in Ifedore get a befitting Secretariat. At a time the Union got scores of Plastic Chairs for their day to day activities, as well as meetings. Little wonder, he was reelected as Secretary of the NUP in Ifedore on September, 2020, a position he held until his death.

Due to his passion for Secretarial duties, he turned down his appointment as Chairman of Al-Hassan Mosque – a community Mosque where he prays and where I and my siblings worship while living at the family house in Ijoka. The Mosque is situated along the new road in Abusoro, off Ijoka road, Akure. When it was obvious he should stepped into the position, since the demise of two notable elders of the Mosque – Alhaji AbdulAzeez Igbaoreto and Alhaji Hassan Adetimehin Eji, my late Dad opted for the position of Secretary of the Mosque. In playing his roles, he would document all the donations and expenses of the Mosque. He would as well take all the minutes of meetings. I could remember the roles he played towards the painting of the Mosque and how the congregations were able to raise funds to purchase a new power generating set. He would insist I pay my own dues for the development of the Mosque. I remembered when the Mosque was tasked to contribute towards the development of the Akure Community Muslim Cemetery at Aponmu town, he collected my own contribution on one of my visitations to him.

Ade 2, as he was fondly called by his friends was very conscious of his dealings when it comes to handling official documents and funds. After he was buried, I called one of his friends, a former Permanent Secretary in the Ondo State Civil Service, Mr Biodun Alabi if he was aware of his debt to any of their mates, his response was apt: “Your father isn’t that careless,” he said.

On the day he died (Wednesday, 5th January, 2022), upon directive I had to issue a terse message and sent to some religious WhatsApp groups I belong to inform them about his demise and subsequently announced that the Janazah (Muslim prayer for the dead) would be done the following day (Thursday). At exactly 10am the faithful day, he had already been tied in white fabric and his remains was brought out for prayers. The turnout of the people at the prayer was surprising. A lot of well wishers who heard the news came to partake in the prayers. My elder brother, Seun Jamiu, who had traveled overnight from Kaduna was able to make it. Our eldest brother, Adebola Idris had been told to mobilize grave diggers to the cemetery so that we won’t witness a delay on getting to the site. His only daughter, Fatimah was in Ibadan at the time on National Youth Service. She would later join us in Akure that same day of burial. Everyone of us (his children), including Qaasim Adedamola, who was absent due to his academic studies abroad, were consoled with the fact that he lived a meaningful life towards the end of his time.

Sadaqah Jariyah means a continuous, flowing and ongoing charity. So for my late Dad, the family was not hesitant in establishing one for him. We dug a well in his memory for an Islamic School that was in dire need of water at that time. The family has also agreed to start giving scholarship to indigent secondary school students who would want to further their education and are financially challenged.

As I passed through Aponmu town on my way to Ondo yesterday, Wednesday, 4th January, 2023, I looked at the cemetery with awe, having it in mind that my late Dad’s resting place was a Muslim cemetery, the best of all places a Muslim faithful should be buried. So when the believers visit the place and offered prayers for the inhabitants of the graves, Mr Adegbaye Saheed Adebumiti would be part of this beneficent gesture.

Olusegun Hakeem Adebumiti is one of the Sons of the late Adebumiti and Publisher/Editor-in-Chief of Precision Online Newspaper & Magazine.