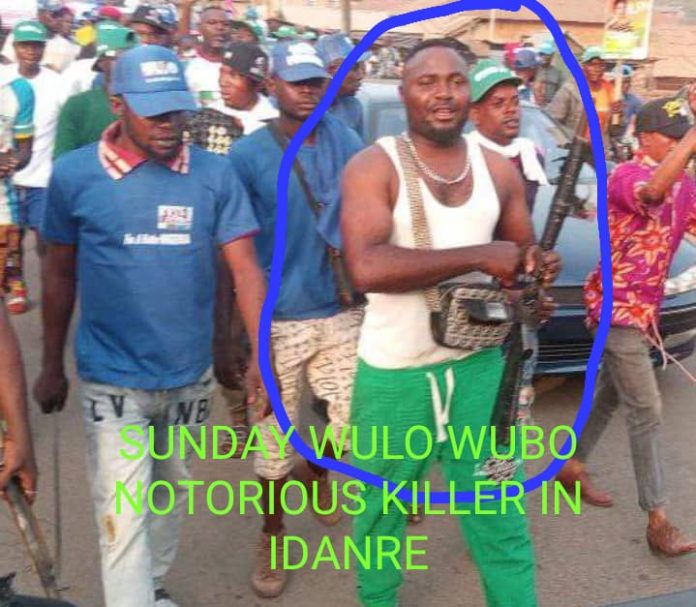 A Political thug in Idanre Local Government Area of Ondo State, Sunday Akinmolayan was on Saturday arrested by the Idanre Police Division over attack on one Israel on Friday, 14th January, 2022.

Reports say the thug led his gang to allegedly attack Israel, a member of the People’s Democratic party.

The thug popular known as Wulowubo or Sebe has allegedly committed series of attack on innocent people in Idanre including attack on the convoy of Ondo State Governor during project commissioning in Idanre on 2021.

He had since been transferred to the Police Headquarter in Akure for further investigation.

Before his arrest, he allegedly attacked one Igbekele Oluwasanmi, a driver to the Idanre Local Government PDP Chairman.

Worried by political violence in the Idanre council area of Ondo state, the Paramount traditional ruler of the town, the Owa of ldanre, Oba Fredrick Aroloye, has called political leaders in the town to a peace meeting, expressing his concern over the bloody clash between the members of the leading political parties in the council area.

In less than 24 hours the monarch warned all politicians in town to eschew all forms of crisis, asking the police to arrest those found with dangerous weapons and intimidate the people across the town, Sunday Akinmolayan allegedly went rampage and attack Israel, a PDP supporter.

It could be recalled that, trouble started in the town on Saturday when House of Representatives member, Tajudeen Adefisoye, representing Idanre/Ifedore Federal Constituency, with his supporters, allegedly shot into the air while passing by the venue of the PDP meeting on their way back from the mega rally of All Progressives Congress (APC) in Akure, the state capital.

The APC thugs on instruction of Adefisoye allegedly began to attack the PDP members unprovoked and many people were injured in the process while the shop where the meeting was holding destroyed.

Recounting some of the atrocities committed by Sunday Sebe as also called, PATH learnt that in February 25, he allegedly attacked Mr Oluwarotimi Akeredolu, Ondo State governor at Idanre, he allegedly led attack on the National Association of Idanre Students during their election on the 3rd of January, 2022.

Also at the intra party primary of the APC, he allegedly shot a party member which led to a reprisal attack that have his four fingers chop off while also attacked Alhaji Sheriff Awujola on the 5th March, 2019.

Meanwhile, the people of Idanre has demanded justice from the Nigerian Police Force, Ondo State Command, saying they believe in the leadership of the current Commissioner of Police, CP Oyediran Oyeyemi, adding that the case must not be swept under carpet.

“The attack on my people is the result of total rejection of the APC candidate who has failed woefully to provide dividend of democracy to the people of the Idanre/Ifedore Federal Constituency in the last three and half years of poor representation at the Lower Chamber of the National Assembly.

“We have confidence in our security agencies mostly Nigerian Police Force, Ondo State Command that thorough investigation will be done to unravel the true position of what played out in Idanre from Saturday”.

A concerned resident of Idanre said in spite of the current position of Hon Tajudeen Adefisoye, justice must prevail. ” PDP and Hon Festus Akingbaso is a peace loving man that value the lives and property of his people he intend to represent at the House of Representatives of the National Assembly”.