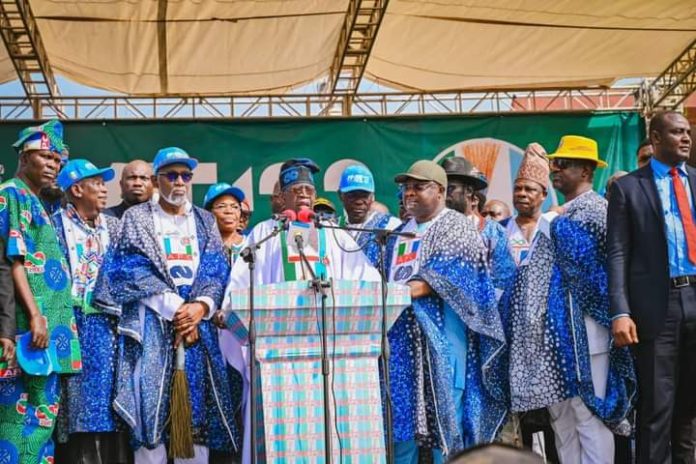 Ondo State chapter of the All Progressives Congress (APC), under the leadership of Engr. Ade Adetimehin, has applauded its members for the massive turnout, successful outing, organization, and the reception accorded the party’s Presidential Candidate, Asiwaju Bola Ahmed Tinubu, and other visiting leaders of the party during the rally at the Moshood Abiola Democracy Park, Akure, over the weekend.

This is contained in a statement signed by Mr Alex Kalejaye, Publicity Secretary of Ondo APC.

“We can not appreciate our members and enthusiastic party sympathisers enough for their proper and civilized behaviours.

“The party notes that its members, and indeed the good people of Ondo State, exhibited enviable degree of maturity in dealing with the thousands of visitors, and displayed memorable hospitality during the event.

“We were not surprised at the rousing reception accorded our presidential candidate, and his entourage because the party is solidly on ground, on account of good governance, spread, and structures.

“Without doubts, the people of the Sunshine State acknowledge the capacity, competence, and political acumen of Asiwaju Bola Ahmed Tinubu to lead Nigeria. They are earnestly awaiting the D-Day, to vote en block for him and his running mate, Senator Kashim Shettima.

“We need to emphasize that massive turnout of the people of Ondo state on Saturday was an absolute display of love for, and acceptability of the APC presidential candidate and his running mate.

“We applaud our dear Governor, Arakunrin Oluwatotimi Akeredolu, SAN, CON, for providing enviable leadership and direction, in the State and the South West geopolitical zone. The success of Saturday event stemmed largely from his ingenuity.

“We salute the tireless efforts and sacrifices of various leaders to ensure the level of success recorded. The Contact and Mobilization Committee, under the guidance of South West Chairman, Hon. Isaacs Kekemeke, performed wonders.

“Having spoken in crystal clear language at the rally, the party appeals leaders at various levels to sustain campaigns in their units, wards, and local government areas, for resounding victory come February. We are expected to deliver highest number of votes in the South West for our candidate.

“The victory would, however, be hollow without delivering other candidates; for National, and State Assemblies,” the statement read.