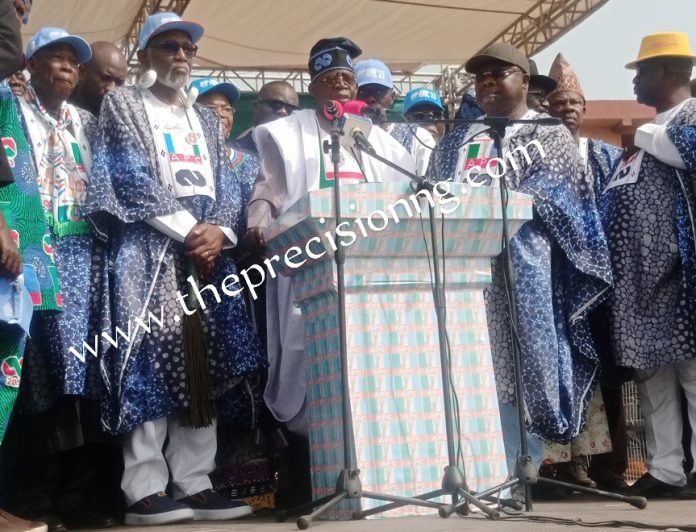 Candidate of the All Progressives Congress (APC) in the 2023 Presidential Election in Nigeria, Asiwaju Bola Ahmed Tinubu, has promised to actualize the Deep Seaport project in Ondo State.

Tinubu made the promise at a rally in Akure, the Ondo State Capital on Saturday.

The former Lagos State Governor also promised to scrap estimated billing which is the order of the day in Nigeria’s electricity system.

While assuring them that he had a template in Lagos to show for his experience about governance, Tinubu urged the voters in Ondo to vote for him in the interest of their future.

He also took time to take a swipe at Atiku Abubakar and Peter Obi of the PDP and Labour Party respectively.

According to him, both Atiku and Obi cannot match him in terms of records in governance. He alleged that Atiku will sell Nigeria’s assets to his cronies, while Obi is an “emergency warehouse economist.”

Earlier, the Governor of Ondo State, Oluwarotimi Akeredolu assured Tinubu of victory in the State.

In the same vein, APC Chairman in the State, Ade Adetimehin said the party is strong and united ahead of the election.

The National Secretary of the APC, Iyiola Omisore who led other members of the National Executive Council to address the audience, said the Tinubu government will bring good governance to their doorsteps.